Before 1874 there was nothing, and after 1970 there was nothing. But in between thrived the cliff-top colliery village of Marsden in the narrow band of greenery which now exists between the main road and the coast, immediately north of Souter Lighthouse.
You can barely imagine it ever existed today, but it very much did. And it all began, as it so often does, with the sinking of a couple of coal shafts – on this occasion by the Harton Coal Co. – in the shape of Whitburn Colliery, a few hundred yards to the south of the future village. The labour demand for both this and the emerging limestone quarries and lime kilns in the area necessitated the construction of a new settlement, and thus the brand new village of Marsden was born with its 135 houses set out in nine rows.
The inhabitants of the ‘new town’ were well catered for. All had gardens or allotments, there was a post office, a Co-operative store, two chapels (Anglican and Methodist), a Miners’ Institute & Reading Room, a sports field, and a school. The famous ‘Marsden Rattler’ connected the villagers’ tiny railway station – said to be the smallest in England – to the rail network, and carried the men to and from work. At its peak around 700 folk lived there.
After doing very nicely for a good half century, one by one the local industries began to disappear during the 1930s, ‘40s and ‘50s, and employment opportunities began to wane. In 1968, the failing Whitburn Colliery finally closed, by which time Marsden was already in decline. The decision was then taken to entirely dismantle the village as part of a beautification process – and almost everything was swept away in a very short space of time. Only the old school building and a chapel were left standing.
So next time you visit Souter Lighthouse, take a sweeping look to the north and try to picture it all. Here’s a map to help you… 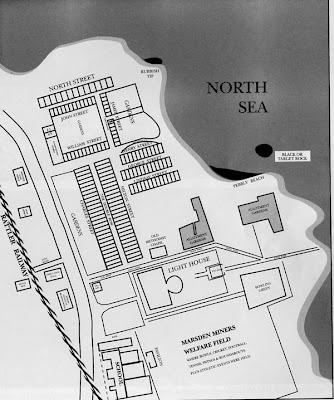 (taken from www.bornyesterday.org.uk/old_marsden.html - not sure who owns the copyright).
See also www.marsden-ons.co.uk/MFHN/marsvill.htm .