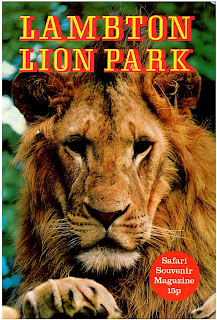 Those of a certain age will remember the North-East’s contribution to the 60s and 70s fad of UK-based safari parks, namely, ‘’. Situated between and Bournmoor, it existed for eight short years during 1972-1980.

This odd tourist attraction came about on the whim of the then Lord Lambton, who no doubt fancied squeezing a little bit more money out of his substantial County Durham estate. Jimmy Chipperfield (of circus fame) was consulted in 1970, and two years later African beasts were roaming the banks of the River Wear whilst astonished locals looked on from their cars. The site was officially opened by Lucinda Lambton in July 1972.

The venture was a huge success and in 1975 the decision was taken to upgrade the site – the set-up eventually being relaunched as ‘’. New features included the addition of a ‘’, children’s rides and a miniature railway, among other things.

Given its early success, I’m not altogether sure why the park closed in 1980, though there are whispers on the internet about problems with escaping animals and general lack of funds.

After its closure, there was little in the way of public access to the site and the estate fell into general decline. However, it is currently undergoing redevelopment, and has even been used as the setting for the ’s period drama, The Paradise, during 2012.