A little off the main drag linking Holy Island to the mainland are a pair of curious erections known as Snook House and Snook Tower. Located on the sticky-out bit on the landward side of the island known as, in fact, ‘The Snook’, these isolated buildings are universally ignored by those intent on making the most of their window of sea-less opportunity who strike on regardless along the Causeway to Holy Island village, some 2 miles eastward.

There isn’t a great deal to say about them, as not a lot is known – at least by me. Any input would be most welcome. The first, Snook House, looks for all intents and purposes like any other domestic dwelling – which I’m pretty sure it is. However, it was once a ventilation shaft for Scremerston Colliery some 7 miles NW and very much on the mainland. From Scremerston the coal seam dips down deep below Holy Island and out to sea. The old colliery closed in 1965. 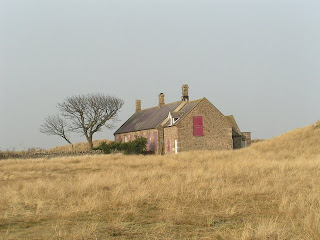 Of Snook Tower, however, little is conveniently known. Build, presumably, in the nineteenth century, its purpose seems to have been nothing more than that of an observation tower or look-out point.
Posted by HistoryMick at 12:15