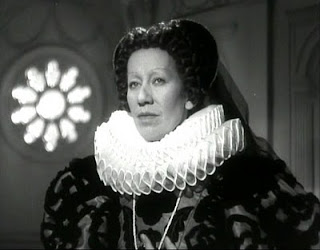 Flora McKenzie Robson, one of the twentieth century’s greatest character actresses of stage, film and TV, was born at 11 Village Terrace, Westoe, on 28th March 1902. Her father, a shipping engineer, relocated the family to the south of England in 1907, where Flora spent most of the rest of her life. From the age of five she competed in recitation competitions, eventually attending RADA as a youth.
Lacking what may be described as ‘glamorous looks’, Robson took on character roles from an early age – a career decision which was to see her excel over the following decades, though her fame didn’t begin to surface until the 1930s. In fact, such was the uncertainty of her ‘trade’ that she spent several years employed as a factory welfare officer in east London in the 1920s. The early 1930s, however, began to bring real stage success – based largely at the Old Vic.
In time, film roles followed. Most notably, of course, were her two performances as Queen Elizabeth I in Fire Over England (1937, picture above) and The Sea Hawk (1940); but memorable roles followed in Saratoga Trunk (1945 – Oscar nomination), Caesar & Cleopatra (1945), Black Narcissus (1947), and the ‘Holiday Camp’ series of films. A host of stage, film and TV appearances followed throughout the ‘50s, ‘60s and 70s. Many will remember her for her role as the Queen of Hearts in the 1972 production of Alice’s Adventures in Wonderland, and her final film appearance as a Stygian Witch in Clash of the Titans (1981).
Her largely unheralded charity work helped her to a CBE in 1952, then a DBE in 1960. She never married nor had children, and lived for many years before her death at her Brighton home with her two sisters. She died in 1984.
IMDb entry here.
Posted by HistoryMick at 11:36