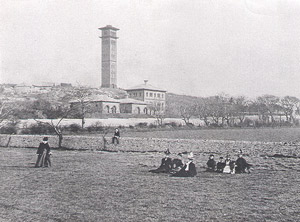 Looking much the same in 1900 (above) as it does today, Cleadon Water Tower was built during 1859-62 as part of the water pumping station of the Sunderland & South Shields Water Company – an organisation which itself had only been formed after an Act of Parliament of 1852. The plant fell out of use years ago, but the tower and many of the outbuildings remain, having found alternative uses. The tower is, in fact (or rather was), a chimney for the old steam-powered pumps which drew clean water from the depths below. The well itself, one of several in the area, was 12ft in diameter and 258ft in depth. Strangely, little is known of the pumps which drove the station – they were removed in 1930 when the plant was electrified.
The elegant Italianate brick construction was designed by Thomas Hawksley and was typical of its day. It is 100ft tall, with a balcony near its summit, and is visible for miles around. An internal staircase spirals around the chimney’s central flue – a void now largely filled with radio aerials and the like.
Posted by HistoryMick at 00:05