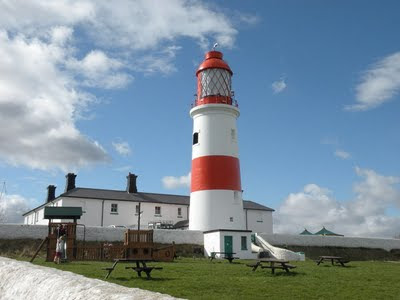 © Copyright malcolm tebbit and licensed for reuse under this Creative Commons Licence.
When it commenced operations in 1871, Souter Lighthouse was the most advanced in the world. Designed by James Douglass, it was the first to use electricity. The 800,000 candle-power light was powered by a steam engine from a dedicated engine room.
Though located on Lizard Point it somewhat strangely takes its name from Souter point a mile to the south. It was, in fact, the intention to build the lighthouse on the latter site, but this was changed at the last minute due to the lie of the land. The original name, however, was retained – though this was thought to have been done to avoid confusion with Lizard Lighthouse in Cornwall.

Though decommissioned in 1988, the lighthouse is still fully operational – with engine house, light tower and Victorian Keepers’ Cottage all open to the public under the guiding hand of the National Trust.

It is, of course, haunted.

The official website can be found here. As for the ghost, try here.