The Oldest Stained Glass Window in the World (NZ338652) 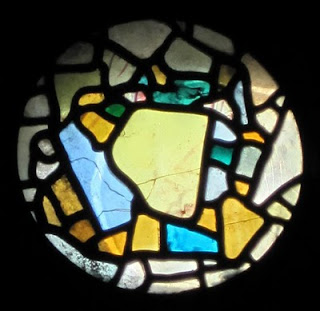 Well, sort of. It is certainly the oldest stained glass that is known to still form part of a window – but we’ve cheated a bit, because this rather random mosaic was thrown together by craftsmen thirty-odd years ago using pieces of ancient glass turned up in a dig in the 1970s.
Professor Rosemary Cramp had been poking around archaeological sites in both Jarrow and nearby Monkwearmouth for more than a decade before she fell upon the above specimens in a particularly significant find at the former site during 1973-74. A decision was soon made to put them on display in the surviving Anglo-Saxon chancel at St.Pauls, the 7-inch diameter window ever since being claimed as the world’s oldest of its type.
The thing is, similar fragments found at Monkwearmouth are probably older, based on the theory that the Wearside monastry pre-dated that at Jarrow by about a decade (670s as opposed to 680s). Though it is not possible to accurately date glass, the Venerable Bede’s writings confirm that such glass was being fitted in the North-East monastries from around 675 – which means that Monkwearmouth must have had it first, followed by Jarrow when it was itself constructed a little later.
So, there you have it: yet more Tyne-Wear rivalry, this time with the Wearsiders coming out, we think, on top. But until they get their bits and pieces into a functioning piece of kit, the Tyne will still have the oldest stained glass window in the world. Well, as I say, sort of.
More reading here and here.
P.S. Fragments of glass from the Monkwearmouth site can be found on display at several locations throughout Sunderland, namely, St.Peter’s Church, Sunderland Museum & Winter Gardens and (from April 2011) The National Glass Centre. Bede’s World Museum, Jarrow, contains fragments from its own site, in addition to that on display in situ in the old church itself.
Posted by HistoryMick at 08:54