One of the neatest feats of Roman engineering in the region is one of the least known. It is the 9.5km line of the Roman aqueduct leading into the old fort of Great Chesters from the NE, a little to the north of Haltwhistle.

Only very faint traces of it remain today, but the logistics of the little water supply project are impressive. Basically, when Great Chesters fort was built on the Wall it didn’t have a nearby water supply, so it had to be piped in from the Caw Burn, about 4km to the NE (more specifically, Saughy Rigg Washpool near Fond Tom’s Pool). However, as the engineers had to rely purely on gravity, the path of the aqueduct took a long and curling route through a 9km+ course to pick up every tiny inch of downhill along the way.

The result was a remarkable bendy, twisting affair taking the channel on a constantly downward trajectory at the almost unbelievably gentle gradient of about 1m drop for every 1,000m travelled. And, once more, the flow of water was eased along a simple, unlined water-course about ½ m wide by ¼ m deep, with the occasional small wooden bridge inserted to take it over minor valleys and streams.

The course of the aqueduct is clearly shown on modern-day OS maps (there’s a decent representation here – and scroll down a bit), though it is not so easy to pick out on the ground. Partial earthworks survive, and in other places cropmarks provide the circumstantial evidence.

Posted by HistoryMick at 12:36 No comments:

In a dip in the course of Hadrian’s Wall between Housesteads to the west and Sewingshields Crags to the east lies a tract of land known as ‘Busy Gap’. It may well refer in the present-day sense to the many thousands of walkers who pass this way every year. But, in fact, the term has a much more sinister connotation: for it was the common descriptive name for a thoroughfare of those of ill-repute – and a place to be very much avoided by those of a more peaceable nature.

Geographically, of course, the little col, or pass, provided an easy means of passage through an otherwise awkward zone. For centuries after the Romans left, the line of their wall provided nuisance value to the general traveller, and, in time, ways, paths and drove roads wore their way through the easy bits in the landscape. And, by the medieval era, the patch of low-lying ground to the east of Broomlee Lough became rather well-trod.

Such spots attracted all sorts of attention, though, both good and bad. And so it was that during the days of the Border Reivers (16th & 17th centuries), this route through the wall became a way by which ne’er-do-wells and the like could easily come and go on their evil ways. Such was the severity of the problem that a new catchphrase came into use across the region: the ‘Busy Gap Rogues’. Even as far as Newcastle – and well into the 18th century – the expression was a by-word for anyone who was suspected of being up to no good, and a downright term of abuse for those who lived out in the sticks. Even the famous traveller, William Camden, writing in his Britannia (1599), dared not visit the troublesome place on account of the “rank robbers” thereabouts.

From the mid-17th century an extended family of Armstrongs is known to have lived at what remained of Housesteads fort and the immediate vicinity. The area around the ‘gap’ became the headquarters for protection rackets and unruly horse thieves whose grasping fingers extended as far north as Perth and south into Yorkshire. There are remains in the landscape of Busy Gap today of old stock enclosures and the like, no doubt used by the Armstrongs during the course of their nefarious dealings.

Around the turn of the 18th century things began to change, and the area around Busy Gap – Roman remains and all – sank softly back into tranquillity. Eventually, of course, society came to appreciate the area for what it once was under the Romans and preservation, tourism and leisure became the order of the day. Gone are the rogues … and here instead roam the ramblers.

Around the stretch of Hadrian’s Wall known as Sewingshields, near Housesteads, are a few hundred square yards of Northumbrian countryside with strong links to Arthurian legend. It all concerns King Arthur and his court in an enchanted subterranean sleep, and, well, I’ll let John S.Stuart Glennie explain. This is taken from his Arthurian Localities tome of 1869:

… Turning now westward, and passing through the picturesquely-situated old town of Hexham, with its Moot Hall and Abbey Church, on a wooded ridge over-hanging the Tyne, we stop either at the Haydon Bridge, or the Bardon Mill station of the Carlisle and Newcastle Railway. For six or eight miles to the north of these stations, and in the neighbourhood of Housesteads, the most complete of the stations on the Roman Wall, are the principal Arthurian localities of this Northumbrian District. The scenery here is very remarkable. The green, but unwooded grazing hills – wide and wild-looking from their want of enclosures, and the infrequency of farm-houses – seem like the vast billows of a north-sweeping tide. Along one of these wave-lines runs the Roman Wall, with the stations of its garrison. In the trough, as it were, of this mighty sea, and to the north of the Wall, were, till a few years ago removed and ploughed over, the ruins of the ancient castle of Sewing Shields, referred to by Sir Walter Scott as the Castle of the Seven Shields, and by Camden as Seavenshale. Beneath it, as under the Eildons, Arthur and all his court are said to lie in an enchanted sleep. And here also tradition avers that the passage to these Subterranean Halls, having once on a time, been found, but the wrong choice having been made in the attempt to achieve the adventure, and call the Chivalry of the Table Rounde to life again, the unfortunate adventurer was cast forth with these ominous words ringing in his ears:

O woe betide that evil day
On which this witless wight was born,
Who drew the Sword, the Garter cut,
But never blew the Bugle-horn.

the very opposite mistake, it will be observed, to that of which the equally luckless Eildon adventurer was guilty.

The northern faces of three successive billows here, if I may so call them, present fine precipitous crags – whinstone and sandstone strata cropping out. These are called respectively Sewing Shields Crags, the King’s, and the Queen’s Crags. Along the crest of the first of these the Roman Wall is carried. The others take their name from having been the scene of a little domestic quarrel, or tiff, between King Arthur and Queen Quenivere [sic]. To settle the matter, the king sitting on a rock called Arthur’s Chair, threw at the queen an immense boulder which, falling somewhat short of its aim, is still to be seen on this side of the Queen’s Crags. And on the horizon of the immense sheep farm of Sewing Shields, and beyond an outlying shepherd’s hut, very appropriately named Coldknuckles, is a great stone called Cumming’s Cross, to which there is attached another rude Arthurian tradition. For here, they say, that King Arthur’s sons attacked, and murdered a northern chieftain who had been visiting their father at Sewing Shields Castle, and who was going home with too substantial proofs, as they thought, of the king’s generosity.

As mentioned in the text, Sewing Shields Castle no longer exists, having been expunged from the landscape in the mid-nineteenth century (it lay somewhere to the north of the Wall near Sewing Shields Farm). The legend of a slumbering royal court, and the failure of a visiting stranger to rouse them, is a common yarn – the author mentions a similar tale from the Eildon Hills, and there is another associated with Dunstanburgh Castle. As for Cumming’s Cross, this was the memorial supposedly placed by Arthur after he heard of the murder of his visiting dignitary, named Cumming or Comyn. And then, unmentioned above, there’s nearby Broomlea Lough, a watery expanse said to be the lair of the Lady of the Lake and the site of a great hidden treasure.

So, you see, you needn’t look any further than the North-East of England for a perfectly viable setting for all that King Arthur stuff.

Posted by HistoryMick at 11:50 No comments: 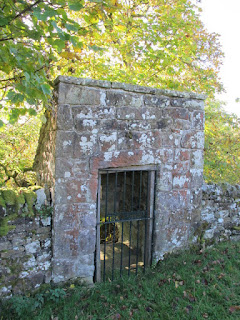 If you’ve ever seen one of those old castle toilets known as garderobes on a visit to one of our National Trust properties, you will know exactly what is going on at the Long Drop Netty near Stonehaugh on the edge of Wark Forest. Garderobes, you see, were castle privies which incorporated an external ‘drop’ of some several metres which deposited human waste into the castle moat. And at old Low Roses Bower a little to the east of Stonehaugh can be found just such a contraption – minus the castle, of course.

The Long Drop Netty was essentially the outdoor loo of Low Roses Bower (a bower being a sort of secluded country cottage) – which, I think, also serviced the nearby and more modern Roses Bower farmstead. Its operational details barely need describing – the little room sitting on an overhang above the Warks Burn. All very hygienic, I suppose, if a little draughty. It is believed to be the longest drop of its kind in England and dates back to the 18th century. Low Roses Bower itself may originally have been a 15th/16th century bastle, but it came to be associated with one Rosamund Dodd, who is supposed to have used the spot as a romantic hideaway for her and her lover. Amazingly, the netty itself was in use into the 1950s.

Curiously, though Low Roses Bower is no longer in use and in ruins, the Long Drop Netty itself has recently been lovingly restored.  Additionally, and fittingly, the toiletry outpourings stand opposite a geological feature shown on OS maps as ‘Windy Edge’. Brilliant.

Posted by HistoryMick at 12:15 No comments: