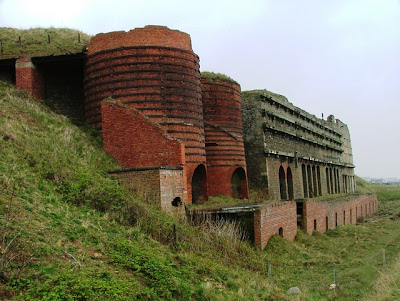 © Copyright Mick Garratt and licensed for reuse under this Creative Commons Licence.
Marsden Limekilns, facing bleakly out to sea at the southern extremity of Marsden Bay, are one of only three Scheduled Ancient Monuments in the Borough of South Tyneside, the other two being Arbeia Roman Fort and St.Paul’s Monastery. They are unmissable to anyone using the present-day A183 Coast Road.
The massive creations date from the 1870s, being an off-shoot industry of the nearby (but long gone) Whitburn Colliery. The limestone which was processed in the kilns was quarried literally yards away on the clifftop above, the stone being fed into the top of the complex. Coal from the nearby pit fuelled the kilns, heating and breaking down the stone to produce quicklime, which was used to neutralise soil, and also had uses in the cement, steel and chemical industries. The kilns to the right pre-date the circular affairs to the left, the latter being added in 1895. The insertion of the raw material at the top and the extraction of the quicklime at the base was almost continuous when the kilns were operating full-pelt. A railway line at the front took the goods to South Shields for shipping.

When the colliery closed in 1968 the limekilns went with them, their source of power gone.