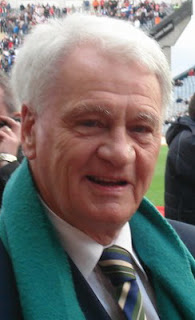 Perhaps Sacriston’s greatest claim to fame is its status in the realm of professional football – namely, as the birthplace of Sir Bobby Robson, one of the most famous figures in the history of the sport. His links with the town, though, are somewhat tenuous. He will certainly have had no memories of his first home, as he and his family moved to nearby Langley Park within months of his birth.

Born on , Robert William Robson was the fourth of five sons of Philip and Lilian. Chasing work as a miner, Philip soon took his family to their new home a few miles to the south-west – and there Bobby grew up and attended the local primary school. Fired by watching Newcastle United with his father, he took to the game himself at an early age, playing for Langley Park Juniors – before moving on quickly to the professional ranks with Fulham, for whom he made his debut in 1950.

He spent six years at the club, before moving to (1956-62) – and then returned to Fulham for a second spell during 1962-67. He played primarily as an inside-forward, and though he never won a major honour at club level, he did earn 20 caps for . In his personal life, he married Elsie in 1955 and they had three sons together.

Robson moved into management in 1968, where he stayed in continuous employment for 36 years. First Fulham and (notably) Ipswich Town, then a spell as England manager during 1982-1990, before many years abroad with PSV Eindhoven (twice), Sporting Lisbon, Porto, Barcelona and then, of course, back home with Newcastle United, completed a glittering career. He won many, many major club honours across (though, ironically – and typically – none with !), and famously took to the semi-finals of the 1990 World Cup. He was deservedly knighted in 2002.

He died on amidst great outpouring of grief and mourning by folk across the North-East. His name lives on in the activities of the high-profile Sir Bobby Robson Foundation, which funds cancer projects across the region.

Posted by HistoryMick at 15:22 No comments: 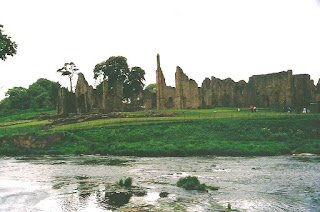 Finchale Priory is a somewhat isolated, ruinous affair tucked away in a bend of the River Wear about four miles north of . It has, rather curiously, been used as a holiday resort by one section of society or another for around 800 years.

Its roots lie in the twelfth century when it was the base for Saint Godric, a merchant-cum-sailor-cum-monk, who eventually ensconced himself there as a hermit. It is said that he lived to be more than 100 and to have sat out the last six decades of his life at Finchale. Needless to say, by the time he passed away in 1170, he had become something of a celebrity, having enjoyed many visits from the great and the good.

Soon afterwards, the little collection of hermit-like buildings at this quiet spot in the countryside was ‘developed’ by successive Priors of Durham into a Benedictine outpost of the mighty mother church down the road. For the next three hundred years or so the complex at Finchale slowly grew – though, in all honesty, it was never overly utilised.

The newly-formed Finchale Priory survived as a religious house until 1535 and the Dissolution. For much of its history during 13th-16th centuries it was effectively used as a holiday retreat for monks from nearby Durham, who would go there in groups of four for three-week periods and where they would ‘enjoy’ a slightly more relaxed timetable for the duration.

These days much of the surrounding countryside is taken up with the long-established ‘ and ’ – see here. 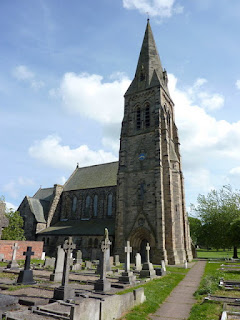 © Copyright Alexander P Kapp and licensed for
reuse under this Creative Commons Licence.

St.Mary’s Church, , was built in 1864 to replace an earlier chapel which occupied the site. It is notable for its rather lofty tower – some 130ft in height – which seems to be somewhat out of proportion to the rest of its modest frame.

The disparity is explained by the fact that the tower and spire were added in 1877 thanks to the generosity of Sir George Elliot, MP, in memory of his daughter, Elizabeth. Elliot, an extraordinary character who rose from trapper boy to the baronetcy, had a colourful network of high-ranking contacts. One of his many roles was as financial advisor to the Egyptian Khedive.

It was this unusual link with the Land of the Pharaohs which gave the church and village its famous historical relic. For there exists a granite tablet within the church which records the gift of the tower and spire by Sir George – and the inscription also states that the tablet is a portion of a block of stone obtained by Elliot in 1876 from the Great Pyramid of Giza … with the permission of his pal, the Khedive, of course.

There is a similar ‘ stone’ in – near to where Elliot lived as a boy. Posted by HistoryMick at 12:49 No comments:


Let’s get one thing straight before we start: the pronunciation is Witton Jilbert, not Gilbert. Sounds a bit French? That’s because it is – well, , actually.

The village a few miles north-west of was originally called simply Witton (probably meaning ‘the white fortified settlement’ – perhaps containing whitewashed cottages), with roots in the Anglo-Saxon era. But then along came the and things got a bit more complicated.

First there was Gilbert (Jilbert, remember) de la Ley, who lived in these parts as Lord of the Manor during c.1120-80. Many records survive which seem to indicate that this chap was something of a God-fearing philanthropist, using his wealth to good effect, including much work in connection with the local leper hospital and gifts given to the Prior of Durham.

Whilst there are many reasons to assume that it was this Gilbert whose name was affixed to the village’s name, there is, however, no record of the ‘name change’ until a good deal later (around 1300). And by this time another similarly-named individual had passed through the history books, namely, one Gilbert de la Latone, whose family had obtained the estate around 1200. Though the de la Latones only held sway in the area for a few short generations, the village attracted a great number of posh folk to its streets during this time as Witton Gilbert became a bit of a hot spot for countryfied second homes for the upper classes of nearby .

So which Gilbert should take the credit? Perhaps we shall never know for sure. But isn’t it strange how folk memory hangs onto the slightly unusual pronunciation of a local place-name for so many centuries?

Lots more info on the history of Witton Gilbert here.

Posted by HistoryMick at 14:04 No comments: