The little patch of Northumberland to the south of Stamfordham has gone by a few names over the past half century or so. Since the start of World War II it has been almost exclusively a military affair, and remains so as modern-day Albemarle Barracks. But it began life in 1939 as one of many hastily-built aerodromes, and was commonly known as Ouston Airfield or RAF Ouston.

Though it has not seen an aeroplane for several decades, the rather odd arrangement of runways can still be clearly made out on modern day maps: three long strips criss-crossing one another, with an outer ring-road enclosing the site. Its aviation history is a standard affair: opened in 1941, hosting Hurricanes and Spitfires initially, to be followed by all sorts of warplanes, from Defiants to American Mustangs and Typhoons to . Post-war, it continued in use in a ‘reserve’ role into the late 1950s, and some aircraft maintenance work was carried out there into the 60s.

Just when its useful life seemed to be coming to an end, it suddenly burst back onto the scene as a car and motorcycle racetrack in the early to mid-60s. Racing may well have taken place there as early as 1961, but what is known for certain is that the and District Motor Club organised meetings at Ouston Airfield in consecutive Junes in 1962, 1963 and 1964. Jackie Stewart is known to have blown the field away at one race at Ouston in his Jaguar E-type in one of his earliest wins (1962 or 1963, reports differ); and the great Jim Clark was paraded there in 1964 and presented the prizes. In 1965, apparently, a crowd on 20,000 watched a motorcycle race meet at Ouston.

Two years later, in 1967, the site was reopened as an airfield for a short duration, acting as the for five months whilst ’s runway was extended.

Then, in the early 1970s, it was handed over to the army and renamed Albemarle Barracks, and aeroplanes have never left its surface since (though Apache helicopters are still to be seen there). Recently it has found yet another use: as a secure compound for the transport of nuclear material and/or warheads – or so the rumours go… 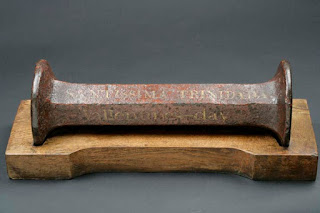 Before the present-day Matfen Hall was built (around 1828) there existed on the spot an old manor house which once belonged to Admiral Lord Collingwood’s father-in-law. John Erasmus Blackett was to die in 1814, but his name lives on in ’s .

Rewinding a few years to 1797, our hero, Cuthbert Collingwood, was engaging the Spanish in the famous Battle of Cape St.Vincent, off the coast of – an encounter which the Brits were to win. And during this skirmish, Collingwood, aboard his ship, Excellent, scraped alongside many enemy vessels, not least the largest warship of its time, Santisima Trinidad. The Spanish flagship was a major target of the British Fleet and, though she was not captured, she was badly damaged and hobbled home to for repairs after the battle.

During Collingwood’s exchange of fire with the ship he laid his hands upon a 50lb double-headed Spanish bar-shot, which he pocketed and took back home on a rare visit to Blighty. He thought it a rather neat idea to give it to his father-in-law as a gift, whereupon it was put on proud display in both Blackett’s old manor house in Matfen and the later hall which replaced it. The relic is suitably engraved with the ship’s name and the date of the battle (Valentine’s Day) – and, as far as I know, it is still there to this day.

Strangely enough, the Santisima Trinidad would pop up again in Collingwood’s sight-lines in a slightly more famous naval encounter in 1805, where the Spanish giant was to meet its fate.

Posted by HistoryMick at 19:49 No comments:

When we think of the water supply provided to the region, the mighty Kielder Water springs instantly to mind. However, a number of other reservoirs form part of the intricate network of watery connections that keep the North-East quenched – with three of the most important crowded into a few square miles of the Northumbrian countryside about eight miles north of Hexham.

Colt Crag, Little Swinburne and Hallington Reservoirs were all built a long time before the 1970s creation that is Kielder Water, being completed, as they were, in 1871 (East Hallington), 1884 (Colt Crag), 1886 (Little Swinburne) and 1889 (West Hallington). Their construction finally brought to an end centuries of struggle to feed an ever-thirsty Tyneside, all but banishing the threat, finally, of typhus – to say nothing of the needs of fire-fighting. Prior to this, glorified ponds on the Town Moor, Arthur’s Hill and at Carr Hill, , struggled manfully against the booming populations either side of the .

Between the ‘heyday’ of the aforementioned ‘ponds’ and the new complex of 1871-89, Whittle Dene Reservoirs (completed 1848), a little to the SE, carried the responsibility of water supply for the area. And, when it was ready, the Hallington/Swinburne/Colt Crag supply was bolted onto the Whittle Dene system before being piped to and . The network was further extended in 1904 when Catcleugh Reservoir near the Scottish border was brought into use. And then, seventy years later, there was Kielder.

The really quite amazing (and largely hidden) system of tunnels, pipes and aqueducts that connect these large expanses of fresh water both to each other and their points of service was the result of the work of the Newcastle and Gateshead Water Company… and is one of the hidden wonders of the Great North-East.

Posted by HistoryMick at 20:54 No comments: 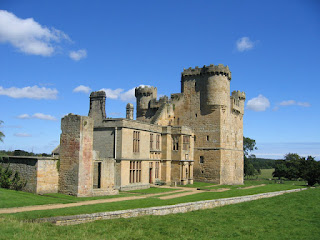 © Copyright Brian Norman and licensed for
reuse under this Creative Commons Licence.

The grounds of Belsay estate a few miles NW of Ponteland present one of the region’s most attractive and curious touristy days out. Firstly there is the classical hall, built by actual Grecian builders who were dancing to the tune of landowner, Sir Charles Monck, in the 1810s; then there is the unusual quarry garden, developed in and around the hole left in the ground following the construction of the Hall; and finally there is the best of the lot – the medieval castle-cum-tower house, which now lies beautifully abandoned, superseded, as it was, by the 19th century hall.

has been described as the “finest English tower-house in the north”, and even this is surely an understatement. On a fine, summer’s day it presents as handsome a prospect as any in the land. For centuries in the possession of the Middletons, the castle began as a three-storey pele tower built in the late 14th century (though this may have replaced an earlier effort). In 1614, the family added a Jacobean range, which can still be seen today. Another wing, added in 1711, has since been demolished.

When, in the early 19th century, the new hall was built nearby, the old place was gutted and left, deliberately, as a folly. It was later renovated by the family, but still left largely unused. Since its take-up by English Heritage, the castle and its Jacobean annex has continued to receive the appropriate care and attention to maintain its stunning demeanour.

Posted by HistoryMick at 19:39 No comments: