The site on and around the institution formerly known as , a little to the east of , has a lengthy history. Chances are, in fact, that not even the locals realise quite how far its story stretches back.

The set-up was founded as a leper hospital way back in 1181 by the famous Bishop Pudsey, and dedicated, rather clumsily, to “Our Lord, to the Blessed Virgin, to St. Lazarus and his sisters, Mary and Martha”. It came with extensive lands and has somehow managed to survive all that has been thrown at it since.

The Dissolution was the biggest hurdle, of course – but limp through the troublesome days of Henry VIII it did, re-establishing itself as “Christ’s Hospital in Sherburn” in 1585. In time, and with the discovery of coal reserves under its associated lands, it became very rich and was able to expand considerably during the Victorian era – branching into education, for one thing. It became what we would recognise as a ‘modern’ hospital during the 1860s-70s following construction work – though there were only 35 beds initially. However, a dispensary administered treatment extensively to the poor of the parish free of charge.

In time, its mode of operation shifted, having spent the past several decades as a care home of sorts, whilst providing financial support to establishments across the county – it closed as a hospital shortly after WWII with the birth of the NHS. It is now a pleasant enclave of Listed Buildings set around a grass court with fine gardens – the old hospital chapel being the only twelfth century survival.

Posted by HistoryMick at 13:24 No comments:


One’s arrival at ’s present-day railway station, high to the north-west of the tight little conurbation, gives the lucky participant one of the finest views of the East Coast Main Line: the stunning vista that is and its mighty Norman Cathedral. If ever there was an excuse to dismount and get out the camera, then surely this is it.

But ’s county town was not an easy place to reach by rail due to the awkward topography thereabouts. Following the birth of the railways in the North-East in 1825, the rail network spread rapidly throughout the region; but the task of linking ’s two main towns, and , was easier said than done.

, a little to the south-east of – and very much outside the city boundary – was the unlikely setting of the very first railway station to serve the county’s ‘capital’. Moving coal from pit to port was the primarily use of the burgeoning rail network, of course, and one such line was thrown across the countryside from Sunderland to the pits and collieries to the south of Durham City at an early stage. This line passed through Shincliffe – the nearest it crept to the county town – so a decision was made to upgrade the line for passenger use as far as the little village. A brand new station was therefore built there to accommodate the travellers, and it opened on .

The had been served by a bridge over the Wear (which leads to ) for many, many centuries – possibly as far back as the Romans. A new structure had been thrown up as recently as 1824, so it was no doubt considered an easy enough two mile trip into town from this point – at least by the standards of the time. Needless to say, though, as people’s expectation grew, so easier access was sought, and a succession of new lines and stations eventually rendered Shincliffe Village Station redundant – though it hung on until 1893. Traces of it still remain in the village, apparently.

Posted by HistoryMick at 14:09 No comments: 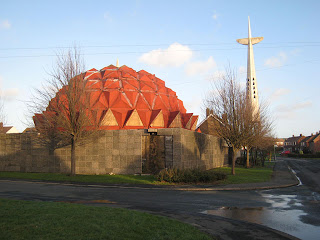 © Copyright OliverDixon and licensed for reuse under this Creative CommonsLicence.

This extraordinary sight is the famous ‘’ of Bowburn, – complete with its detached ‘Rocket’ spire. The unusual combo – more properly known as Christ the King Church – helped make the former pit village rather well-known during its short lifespan, Bowburn being often referred to as ‘Rocket City’.

The ‘Rocket’ was the first to hit the skyline – in 1963 – being commissioned by Father Bill Armstrong and designed by Harold Wharfe. The planned new church took a good deal longer to build, being capped off with its fruity topping in 1976 and dedicated in 1978. In case you’re wondering, the distinctive dome was made from fibreglass.

However, like much of that which was built in the 1970s, the church proved to be of problematic design and questionable construction. It soon began to demand too much in the way of maintenance, was closed in 2004 and then demolished in 2007. A new, and painfully plain, church was built in 2008.

The crazy spire remained, though … but not for long.  In October 2009, shortly before it was due to be cleaned, a gale brought it to ground. It was hastily carted off to the scrapyard before anyone got the daft idea of re-erecting it.

Would you please consider making a purchase from my e-Books4Charity website. There are currently six publications up for grabs, and the majority of every sale goes to help children's charities.  Maybe you can write a booklet of your own for the website?

Posted by HistoryMick at 15:08 No comments:


Visitors to this little village by the side of the old often wonder about the origin of its place-name. After all, proper lies a good fifteen miles to the North-East of this settlement. Can the two possibly be connected in some distant way?

Well, yes and no. By a strange coincidence, both lie adjacent to the River Wear. Moreover, both just happen to have the same place-name derivation. But that’s it, I’m afraid: there the similarities end. , like its more famous namesake, is so labelled due to its being ‘sundered’ or ‘separated’ land. In the case of ‘little ’, the village was an isolated portion of the ancient parish of St.Oswald in Elvet to the north, from which it was separated by the aforementioned river. One may speculate that the ‘Bridge’ bit was added to distinguish it from ‘big’ – perhaps. 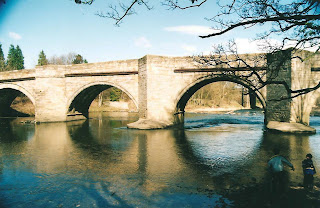 Over the years it has also been known as ‘ juxta Croxdale’ (juxta meaning ‘near’), and even simply ‘Sunderland-by-the-Bridge’. The bridge, in case you’re wondering, is the stone effort which lies nearby, and which has its roots in the 13th/14th century. Though the old river crossing is still in use, the weight of the main road is now taken by a modern-ish metal affair – and for good measure the East Coast Rail line also crosses the river a few yards upstream.

Would you please consider making a purchase from my e-Books4Charity website. There are currently six publications up for grabs, and the majority of every sale goes to help children's charities.  Maybe you can write a booklet of your own for the website?

Posted by HistoryMick at 14:28 No comments: