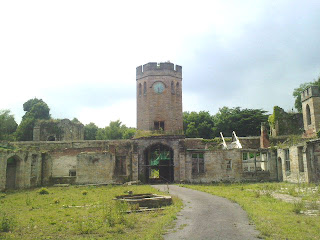 © Copyright johntollitt and licensed for reuse under this Creative CommonsLicence.

There isn’t much left of Ravensworth Castle. This once grand mansion near to Gateshead’s Team Valley was demolished / deteriorated during the mid-twentieth century, leaving only a few outbuildings and odd pieces of masonry intact. For centuries it was the home of the multi-titled Liddell family, eventually falling victim to mining subsidence.

It had known great days, however. Most notable of these were two great events which took place in the first half of the nineteenth century. Firstly, in October 1827, it was visitied by the Duke of Wellington during a high profile national tour. Fine enough, one might think, but at the behest of host Lord Ravensworth the equally famous Sir Walter Scott was also invited to Ravensworth – the two great men staying at the castle for a few short days.

The Duke’s opinion of the stately pile do not seem to have been recorded, but Scott’s diary reveals a few pointed thoughts. After returning to Ravensworth from a banquet at Durham Castle in the early hours of 4th October, he records:

Slept till nigh ten; fatigued by our toils of yesterday, and the unwonted late hours. Still too early for this Castle of Indolence, for I found few of last night’s party yet appearing.

The next day he describes a quiet day, followed by an evening with…

… plenty of fine music with heart as well as voice and instrument…. The Miss Liddells and Miss Barrington sang “The Campbells are coming’ in a tone that might have waked the dead.

Lord Ravensworth’s reputation as a host was further cemented by an even grander gathering in October 1842 on the occasion of his grandson’s 21st birthday. Around 500 distinguished guests from home and abroad were invited, including the Archduke of Austria, together with dozens of lords, ladies, earls and barons. Most of the aristocracy from the northern counties were there, it seems. It must have been a sumptuous occasion.

All a far, far cry from the sad sight of today.

Posted by HistoryMick at 18:59 No comments:

You don’t have to look far into the history of Wrekenton to discover that it appears to have been named by a historian. The famous antiquarian, Rev John Hodgson – he of the History of Northumberland fame – is said to have manufactured the word. He wrote, “After the enclosure of the common (in 1822), Mr Watson, of , Carrhill, founded a considerable village at this place, which, at my suggestion, he called Wrekenton.”

Hodgson created the word from the nearby Roman road, the Wrekendyke, which runs from this spot all the way to . Thus, ‘Wrenken-ton’ means ‘the homestead by the Wrekendyke’. Clever, eh? And so antiquarian-like!

‘Wrekendyke’ itself is an Anglo-Saxon word derived from the Old English wraecca, meaning ‘fugitive, or criminal’. So we have ‘the fugitive’s ditch/dyke’. We can just about recognise the old term in the modern word ‘wretch’.

It is possible that a Roman fort sat hereabouts, too – perhaps on the local golf course – but no trace of any such structure has yet been found.

Posted by HistoryMick at 21:00 No comments:

Many people don’t realise it, but the width of railway tracks around the world vary. The distance between the inside edges of the rails of any railway track is called the ‘gauge’, and the gap in the (and across most of the world) is 4ft 8 ½ in, or 1,435mm. It is called the Stephenson Gauge, after the famous George.

The near Springwell, , has preserved amongst its many bits and pieces, stretches of this Stephenson Gauge – which, amazingly, date back to 1826. It is, in fact, the only surviving operational Stephenson Gauge cable railway system in the world.

The small site maintained by the museum is only a part of the bigger whole – this being the complex operation of getting coal from the pits to the River Tyne. This particular stretch of cable railway hauled wagons up from Black Fell (just north of Birtley) to what we now know as the heights of Eighton Banks (Blackham’s Hill), then down again to Springwell village. The ‘hauler house’ controlled both ascents/descents from the highest point at Blackham’s Hill, and used rope to move the equipment in question.

The network around Springwell came to be called the Bowes Railway after prominent local mineowner John Bowes. Construction commenced in 1826 and continued in fits and starts until the 1850s. Incredibly, it continued working, essentially unchanged, until 1974 – testimony to the efficiency of the system. The present hauler uses electric power instead of steam, and the wagons were originally of the distinctive ‘chaldrons’ variety, but wooden and steel wagons eventually took over.

There’s a nice description, map and pics here. The whole railway, including the buildings, machinery and rolling stock, is now a Scheduled Ancient Monument.

Posted by HistoryMick at 22:00 No comments:

On a small prominence at roughly the spot where the Bowes Railway meets the southern-most extremity of Eighton Banks lies, possibly, the burial site of a once mighty Anglo-Saxon warrior. For centuries known as Blackham, or Blackim, Hill, the nondescript piece of wasteland may well be the final resting place of Blaec, a warlord who seems at one time to have held sway over a rather large tract of what we now know as during the Dark Ages.

The word Blackham/Blackim (Hill) is derived, it is argued, from the Anglo-Saxon word blaecen, meaning ‘of Blaec’ or ‘belonging to Blaec’ – hence ‘Black’s Hill’. And until the Victorian times it seems that there existed a legend that a mighty warrior of this name was buried there. Texts mention the persistent rumour until as late as the 1880s … but nothing much seems to have trickled down to the present.

Despite its twentieth century fall from grace, the land hereabouts has given up signs of ancient human activity – most notably between the wars when shards of worked flint dating back to the Mesolithic age were found. It’s a prominent spot in the landscape, and it stands to reason that humans would have made use of the site through the centuries. Iron Age activity/settlement is certainly likely, the Romans passed by this way … so why not the Anglo-Saxons, too?

No one has any solid evidence as to who this Blaec chap may have been – or even when he lived. It can only be speculated that he rose to prominence during the yawning gap that is 400-1066AD – most likely after ’s ‘Golden Age’, which ended in the mid-eighth century. So we’re talking about 750-1000AD.

And evidence from maps suggests that his area of influence may have been substantial. One thirteenth century cartographer marked a huge inland tract of land stretching from the to the as ‘Blachamoz’ – ‘the settlement of the people of Black’. Yet the question remains: if he existed, why was this man excluded from the royal lineages of Dark Age ? Perhaps he was just a very powerful, non-royal upstart.

Or is it all some woolly myth?

More fascinating reading can be found at www.washingtonlass.com/BlackhamHill.html .

Posted by HistoryMick at 22:26 No comments: