Edward ‘Ned’ Coulson was born at Broadstone Cottages, near The Anchor Hotel, Haydon Bridge, in 1754. Ned was an eccentric character – and a supremely talented one at that. He was a superb athlete on the one hand … and as daft as a brush on the other.

Ned was marked out as odd from his earliest years. He didn’t utter a word until he was five and was skitted by his schoolfriends for this ‘backwardness’. He soon caught up, though, and followed his father into joinery and watchmaking; and on reaching maturity he was tall, wiry and very strong.

His most obvious talent was his running, for which he became famous. He competed successfully in races across the North-East, and kept in shape by running around the countryside from job to job pulling a cart behind him. He played the fiddle, too – and could do so behind his back whilst running. Another trick was overtaking horse and carriages, hiding to let them pass, then overtaking them again, to the astonishment of the travellers. On several occasions he ran up to Haydon Bridge old church at the dead of night, mounted the pulpit and read aloud to himself from the Bible.

His athletic ability would take him on extraordinary journeys. Once he was tasked with taking a message on a 50-mile return trip to Stanhope, which he achieved over the course of one winter’s night and the following morning – surprising his taskmaster by presenting him with his return message in an almost impossible timeframe. On another occasion, after walking 65 miles he reached home in time to take a successful part in some athletic sports. But his most famous feat was beating a horse and rider in a race from Brampton to Glenwhelt – a distance of more than ten miles.

Ned was odd in all sorts of ways – far too many to mention here. He would collect strange things, including herbs which he kept in his bedroom, and hoarded bad (damaged) half-crowns. He also had an irrational dislike of pigs.

One source states that Coulson was of Kenyan descent, which would certainly explain his talent for long distance running. He died in 1807 after fording the Tyne when the bridge was out and catching a cold – after which he bizarrely removed himself to Bellingham where he soon died and was buried.

Posted by HistoryMick at 20:45 No comments: 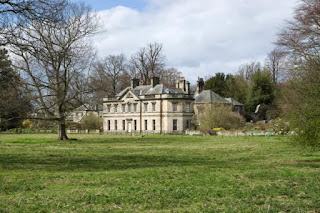 To the immediate SW of the Hexham roundabout of the A69, on the north bank of the River Tyne, stands a small mansion by the name of The Hermitage. Its size and the extent of its grounds belie its humble-sounding name, yet its recent placement on the market for sale revealed it as perhaps the biggest time capsule in the North-East.

Whilst thousands of us speed by in our cars on the busy A69, or ignore its presence whilst turning into Hexham town centre for a day’s shopping, The Hermitage has for decades slept on undisturbed in a sleepy time warp. When its last surviving tenant passed away in 2013 and the property reverted into the possession of its owners, investigations revealed an untouched world of inter-war Britain, unspoilt by the modern world.

The estate itself once belonged to the Priory of Hexham – the land being the reputed site of the 7th century hermitage of St. John of Beverley (a building called the ‘Armytage’ is recorded in 1496). The mansion itself – an 18th century creation with later alterations – belonged to John Hunter Esq., High Sheriff of Northumberland. He died in 1821 leaving two daughters, one of which, Elizabeth, married Robert Lancelot Allgood – the couple taking over the property. It has been in the Allgood family ever since, but in 1922 it was rented out to the Morant family, who remained in residence until 2013. Set in 18 acres with a River Tyne frontage, stable block and outbuildings, it has remained in splendid isolation for the past century.

When its original tenant, Brigadier General Hubert Horatio Morant, died, the property was left to his three children, the last of which, Doreen, died in 2013 – and with there being no succeeding generation the property passed back to the Allgoods. Only then, when the auctioneers moved in to sell the house’s contents, was the amazing ‘frozen world’ uncovered.

The little stately home hadn’t been modernised in decades. There were unopened bottles of wine and champagne from the First World War era, cosmetics and medication from the 1920s and magazines from the 1930s. Little had been thrown out in 90+ years of occupation – some seemingly mundane items being carefully wrapped in newspaper and stashed away in the house’s acres of cupboard and loft space. There were photographs, furniture, paintings, WWI diaries, toys, as well as the estate’s records and accounts. It was an inter-war ephemeral extravaganza – and the whole collection (around 1,500 lots) raised an astonishing £300,000 at auction.

As far as I am aware, though, the house itself remains unsold at a little shy of £2million.

Posted by HistoryMick at 22:13 No comments:

When it comes to early Christianity in the North-East – and Hexham in particular – most casual history enthusiasts look no further than the likes of Cuthbert, Aidan and Bede. The hard-nosed, super-industrious Wilfrid also comes into the frame, too, of course, being the chap who founded Hexham Abbey and a great many other religious houses in the late 7th century AD. But every great man needs his lieutenants, and Wilfrid’s was a man by the name of Acca.

Acca was born in the ancient kingdom of Northumbria around 660, and initially seems to have served in the household of Bosa, the future Bishop of York; but he soon found himself under Wilfrid, probably by the time he was 20. From the late 670s through to Wilfrid’s death in 709, Acca accompanied the great man on his continental travels and served as first his protégé, then his fully-fledged right-hand man during his many high-ranking incumbencies.

In 692 Acca was appointed abbot of St.Andrew’s monastery, part of the Hexham Abbey/Priory set-up. Then in the later years of Wilfrid’s life he acted as the old man’s loyal and closest companion, eventually being named by Wilfrid himself as his successor as Bishop of Hexham in 709.

Acca threw himself into the running of the diocese with gusto, and completed the construction work begun by his mentor. He was a great theologian and rather keen on music, too, once bringing the great cantor, Maban, north for a visit. He was a great friend of Bede, who dedicated many of his works to him – such was his reputation as a cleric and all-round good egg. In short, he brought to completion all of Wilfrid’s Christian plans for both Hexham (including improving and ornamenting the church) and Northumbria (founding many churches, among other things), thus helping cement his predecessor’s legacy.

Acca presided as bishop for 23 years until, in 732, during a period of dynastic upheaval, he was forced to leave. It is not known for sure why he was obliged to flee, but it may have been due to his familial links with the exiting ruling family. Sources vary as to his destination – some say Whithorn or St.Andrew’s in Scotland, others say Ireland – but he eventually returned to Hexham when circumstances permitted, where he was warmly and reverently received. He died in the town at some point during 737-42, was interred near the abbey’s east wall and, in time, was raised to the sainthood. A remnant of one of the two crosses which marked his grave can be found inside the abbey today.

Posted by HistoryMick at 20:10 No comments: 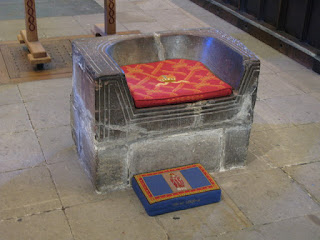 When we think in terms of historical relics, especially religious ones, we often look towards the big, the beautiful, the imposing or the imperial. Seldom do we thing of a slightly lop-sided lump of misshapen rock as anything more than quarry fodder. But not so Hexham’s enigmatic Frith Stool.

Unimpressive it may be, but the tiny throne that sits in the middle of the Choir of the town’s mighty abbey has captured the imaginations of visitors for generations. It is made of sandstone and is also known as St.Wilfrid’s Throne (after the 7th century founder of the abbey) and the ‘Chair of Peace’ (frith meaning ‘peace’, as in being a place of sanctuary). So, yes, this was the spot where, during the Middle Ages, wrongdoers made for as their little area of sanctuary when in flight from authority.

It is generally thought that originally the Frith Stool was made and used by Bishop Wilfrid himself, based, as it was, on similar items of furniture he had seen in cathedrals on his continental tours. It was, quite literally, a throne from which he and succeeding bishops would preside during religious ceremonies. Remember, Hexham Abbey was a cathedral from 678 to around 821, which would have made the Frith Stool an official cathedra and an item of supreme importance.

It’s likely the stool originally stood on legs and was set against a wall; but since its construction the original building in which it was housed has long since gone. The present-day Hexham Abbey is a Norman creation, but it is interesting that the stool has survived many centuries of upheaval – it was clearly a treasured relic.

In more recent centuries, though, the stool has been moved here and there around the abbey with a little less respect. It was during one of these moves that someone seems to have dropped it and it broke into several pieces. It was rather clumsily patched up, until, eventually, it rose once again to reverential status and was placed in its current location in 1910.

Posted by HistoryMick at 18:55 No comments: