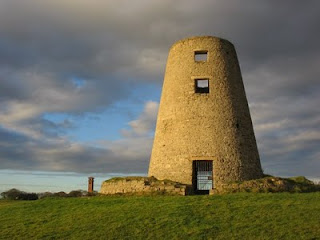 © Copyright DAVID ELSY and licensed for reuse under this Creative Commons Licence
Situated on its lofty perch atop the Cleadon Hills, this ruined windmill was probably constructed in the 1820s – though an earlier construction may well have occupied the blustery site. It is likely to have fallen out of use after it was damaged by a storm in the 1870s, for it is not mentioned in directories after this time.
During World War I it was used for target practice, though it has since been partially restored. In the late 1970s, what was left of the mill’s internal machinery was removed, and the entrances barred.

The ruin is said to be haunted by the ghost of Elizabeth Gibbon, a miller’s daughter who threw herself from the top of the mill tower after suffering a broken heart. The windmill was actually operated by a family of that name at the time of the 1870s storm, so maybe the story is true, if not the ghost.

Despite the structure being Grade II Listed, there is a threat that it may be demolished soon – if rumours on the Internet are to be believed.

For some beautiful images of Cleadon’s landmarks, see here.