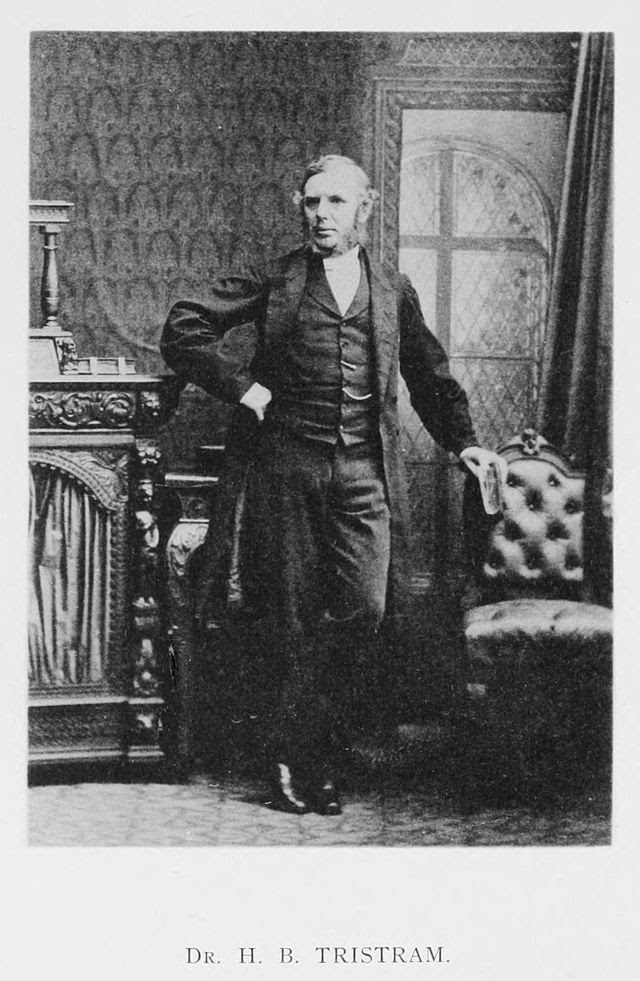 Canon Henry Baker Tristram was an English clergyman, naturalist, Biblical scholar and traveller. Somewhat controversially for his time, he was an early convert to Darwinism, and spent many years attempting to reconcile the theory with his religious beliefs.

Tristram was born at Eglingham vicarage in 1822 – the eldest son of the vicar – and studied at . He was ordained a priest in 1846, but his fragile health (TB included) forced him to live abroad. He travelled widely, including a stint as secretary to the governor of from 1847 to 1849, where an interest in birds blossomed – but on returning to shores found the winters too much for him. Several expeditions to followed, including exploration of the Saraha desert and yet more ornithological adventures – and wrote a book entitled The Great Sahara. He first visited in 1858, returning there several times, where he expanded his collection of birds and identified possible Bible sites. Amidst all of this he became canon of Durham Cathedral in 1873, though his travels continued, including the and also Japan where his daughter spent decades working as a leading light at the Church Missionary Society’s School for Girls.

His infamous link with Darwinism began in the late 1850s when he was seduced by the writings of the great evolutionist. Looking at his own collections of birds, he became convinced of the validity of the new-fangled theory, and penned articles in support of the same.

Tristram, who was a Fellow of the Royal Society, wrote books, papers and articles of all his various adventures, concerned mainly with naturalism and the topography of the Bible lands. His sizeable collections of birds and eggs ended up in ’s and the , . And as any ornithologist will know, a number of birds are now named after him … as well as a breed of gerbil!

He died in 1906 and has a window dedicated to his memory in the north aisle of .