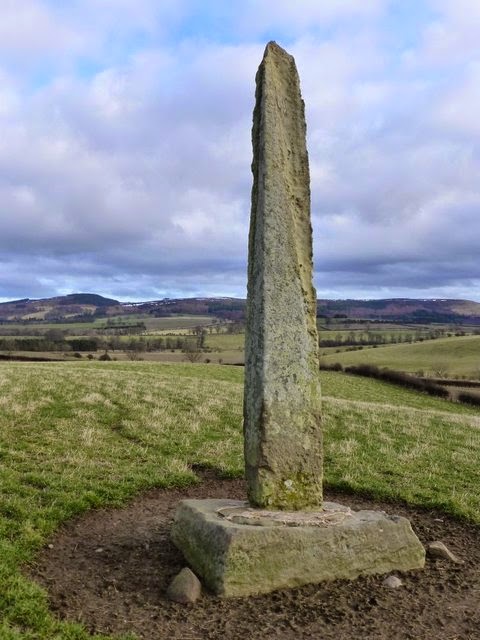 © Copyright Russel Wills and licensed for reuse
under this Creative Commons Licence.

In the middle of a farmer’s field a couple of miles to the SW of Chillingham stands the Hurl Stone, a ten-foot high rough-hewn obelisk of unknown origin yet steeped in myth and legend. Hard facts are difficult to come by, but who needs ‘em?

First of all there is its name. Some speculate that it is derived from the ‘Earl’s Stone’ – though the identity of the gentleman in question is not known. It may have been an ancient standing stone (or cross) at one point, possibly relocated to its present spot by someone or other. Everyone’s  favourite theory, though, is that it was literally ‘hurled’ there by the Devil himself, who, when perched high upon the Cheviot, saw pesky St.Cuthbert going about his pious wanderings in the distance and threw the stone at him in anger.

The Hurl Stone is supposed to be the haunt of fairies, too. An underground passage some sixteen miles in length is supposed to pass under the stone (linking Cateran Hole in the east to Henhole in the west), which, when it was once explored in times of old, revealed evidence of underground fairy-like activity immediately beneath the stone. The adventurers didn’t hang around long enough to investigate further and scarpered sharp-ish.

Sorry to disappoint, but chances are that the Hurl Stone was once a medieval Christian cross which lost its top and was then recycled as a folly (of sorts) by someone with nothing better to do. Some attribute the act to a Mr Jobson, a local farmer, and that a bolt of lightning accounted for the missing couple of foot or so.