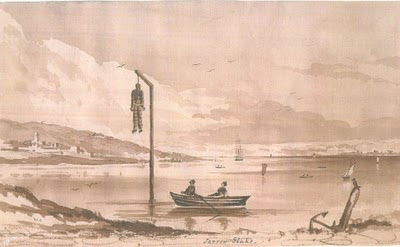 Jarrow Slake, that oddly-named area of reclaimed land on the south bank of the Tyne neighbouring St.Paul’s Church, has a recorded history going back to the time of Bede. The area was then a large expanse of mud-flats into which the River Don wound before emptying itself into the Tyne – but at high tide would fill with water, hence its original name of ‘King Ecgfrith’s Port’, named after the Dark Age Northumbrian king who gifted the land to the monks of Jarrow.
In time, a new name came into use: Jarrow’s Lake – which in turn became corrupted into Jarrow Slake. Little more than a treacherous expanse of gooey mess – as well as an unofficial bird sanctuary – for centuries, it was eventually put to good use in Victorian times as a pond for timber seasoning, for which it served its purpose for around a century from the 1870s. The Slake was also home to an isolation hospital for several years from around 1930, to which access was gained via a catwalk.
In 1972, reclamation work began, and the area was used as a landfill site for some time. Eventually amalgamated into the surrounding landscape, the Slake’s 120-acre muddy expanse finally disappeared for good in the early 1980s. Latterly it has been used as a car distribution terminal for Nissan.
For some fabulous photos of the old Slake, see here. And the area, on a map, as it is now – still, pleasing, called Jarrow Slake!
P.S. The illustrated gibbeting is probably that of William Jobling in 1832 (but that’s another story, see here). Though there is no sign of the cage, the artist may have omitted it in error.
Posted by HistoryMick at 10:35