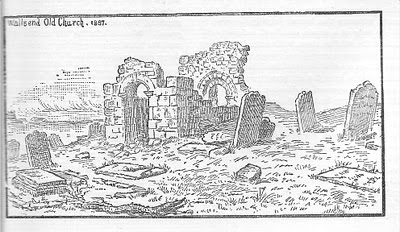 Residents of the North Tyneside town will be familiar with their form, but many from further afield may not even be aware of the existence of this curious collection of stones. They stand in open fields between the town centre to the south and the Coast Road to the north, equally forgotten and ignored by both, apart from, that is, occasion visits by graffiti merchants.
Built in the twelfth century with stones robbed from the Roman Wall, the Church of the Holy Cross was almost certainly constructed by the monks of Jarrow Priory in whose parish it then lay. It seems to have been used for public worship until 1798, by which time it had become so dilapidated that it was abandoned – a half-baked plan of repair leaving the building roofless and utterly unrecoverable. Much of the stone was requisitioned for the building of a barn and stable-block for the nearby parsonage, with the flock adjourning to a school-room for their services for nigh on a decade.
By-and-by a new church – that of St.Peter’s – was built and consecrated in 1809, and the old building was left to crumble. The image above dates from 1887; and in 1909 the site was tidied and a fence erected to help protect the remains.
And as you can see, here, they haven’t changed much over the years.
Posted by HistoryMick at 10:40