Seaton Delaval Hall, recently saved for the nation by a high profile campaign by the National Trust and a tenacious gang of enthusiastic locals, lies in a landscape full of interest to the amateur historian. However, rather than the old hall itself (whose history is interesting enough), it is to the pile’s lesser known outlying landmarks that I shall be turning to in this short article.
Perhaps the most conspicuous of the estate’s secondary constructions is the 18m-high stone obelisk 900m south-by-south-west of the hall. This was erected to the memory of Admiral George Delaval, the man who was responsible (with a little help from architect Sir John Vanbrugh) for the construction of the mighty edifice itself. The Admiral had bought the estate in 1718 from his debt-ridden kinsman, and was in the process of building the hall when he was tragically killed in spectacular fashion in 1723. When out riding in the fields he was unseated, caught his foot in a stirrup, and was dragged several hundred yards across the countryside before coming to a lifeless rest where the monument now stands. A second, now ruinous, obelisk lies just off the north side of the A190 a little to the west of the hall, marking the spot where the Admiral was originally unseated.
He wasn’t the last of his family to die an unusual death. Half a century later, a certain John Delaval, the then heir to the estate, died in 1775, aged 20, “as a result of having been kicked in a vital organ by a laundry maid to whom he was paying his addresses.” His father was so distraught, that he built a grand mausoleum in his honour half a mile east of the hall. The building is now ruinous. 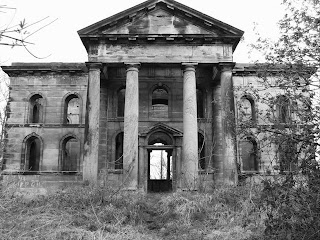 © Copyright Michael Batey and licensed for reuse under this Creative Commons Licence.
Posted by HistoryMick at 13:49