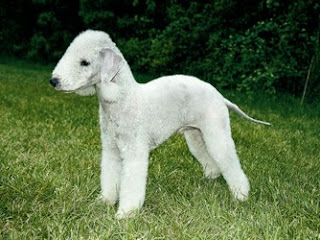 Often referred to as a ‘lamb on a leash’ (or something similar), the Bedlington Terrier is a breed of dog named after the town of Bedlington, Northumberland. Somewhat nippy for a terrier, it is (or rather was) traditionally used for hunting quarry that involved quick-turning prey. The dogs would often have long hair around their fore-quarters to protect them from the snapping jaws of their victims – which included such animals as otters, badgers, foxes and vermin.
The history of the breed goes back in excess of two hundred years. It was originally known as the Rothbury Terrier, after a group of Staffordshire nailors introduced the curious canine to the Northumberland town when relocating there in the eighteenth century. The progenitor of the current breed, though, is usually held up as being ‘Old Flint’, a dog born in 1782 and belonging to ‘Squire Trevelyan’. It became the ‘Bedlington Terrier’ from around 1825, when a local mason, Joseph Aynsley, renamed the breed, no doubt as a result of its popularity among the town’s mining community. They were also known as ‘Gypsy dogs’, due to their association with poaching.
Usually mild-mannered and intelligent, they make excellent and loyal companions nowadays; but owners should remember that they are bred for hunting and, indeed, combat – where they are said to fight to the death. Since their Bedlington days, though, they have become ‘the miners’ dog’, and would often be raced, much as whippets and greyhounds are today.
As many of you will know, the town’s football team are known as the Bedlington Terriers.