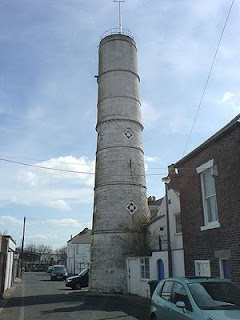 One of Blyth’s oldest structures, ‘High Light’ stands in a curious position for a lighthouse, adjoining a house at the rear of Bath Terrace. Being some 100yards inland, it is difficult to imagine it ever being of any use to passing mariners, but when it was built in 1788 it was, believe it or not, a few yards from the shoreline.
It was constructed in three stages, a process evidenced in its appearance. In 1788, it was raised to some 35ft, with another 14ft being added exactly a century later. In 1900, it was heightened by a further 12.5ft, extending it to its current 61.5ft – each ‘storey’ being necessary due to the rising heights of the surrounding buildings. It was de-activated in 1985, and became a Grade II listed building in 1987.
As can be seen from the picture, the building has a flat roof with railings, and internally is served by a spiral staircase + ladders in its top two (later) section. The lighthouse worked in conjunction with ‘Low Light’ (itself rebuilt in 1936) – well, until 1985, anyway, when new navigational aids were brought into use.
Posted by HistoryMick at 15:19