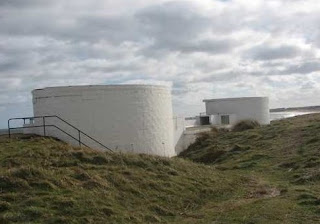 Blyth Battery is a decommissioned coastal defence artillery station on the Northumberland coast a little south of the town whose name it bears. It was originally built during WWI to defend two vital assets – namely, the port of Blyth and the nearby submarine base – and then upgraded for re-use during WWII. It has recently been re-opened as a military and local heritage museum.
One of the best survivals of its type in the country, Blyth Battery is, in fact, a complex spread over a small area, comprising gun and searchlight emplacements and associated buildings. Though the temporary structures which once adorned the site have disappeared, all the major buildings survive and are Grade II listed.
During the restoration project of the past couple of years or so, a clever colour scheme was employed to differentiate between the periods of contruction (based on samples salvaged from the structures themselves) – grey = WWI, pink = WWII, and white = alterations between and after the Wars.
If you fancy a visit – and it’s free – take a look at http://blythbattery.org.uk/