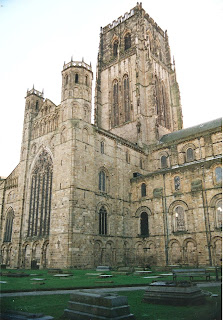 For all its Norman grandeur, Durham Cathedral was the scene of one of the most heinous war crimes in British history. The story of the Dunbar Martyrs is hardly a secret as such, but over the years the harsh facts of the sorry episode have certainly been conveniently and repeatedly skirted around.

It all began with Oliver Cromwell’s defeat of the Scots at the Battle of Dunbar in September 1650. Thereafter, the English leader, not in the best of moods, proceeded to ransack much of whilst sending 5,000 prisoners on a forced march south, where they were bolted up in Durham Cathedral. During their journey they covered 120 miles in eight days with no food or water (except whatever they could quickly scavenge) – and almost half the soldiers died en route, with the remaining 3,000 being crammed into the cavernous cathedral building and castle on 11th September.

And there they were kept until 31st October, with virtually no food or water – or indeed heating. They helped themselves to much of the woodwork within in an attempt to keep warm, but illness and disease quickly gripped the prisoners, with dozens dying every day. One of the few items to escape the captives’ makeshift fires was a clock embossed with a Scottish thistle – an item which survives to this day.

Of the 3,000 who began the ordeal, around 1,400 survived – and most of these were promptly sold as slave labour to the new English colonies in the . About 500 were pressed into lengthy military service overseas.

During maintenance work in the 1940s a mass grave was allegedly discovered to the north of the cathedral, it being (it was assumed) the Scottish burial pit. Subsequent investigations have, however, failed to confirm the theory.

A campaign is currently underway to erect a memorial to the victims of this appalling episode.