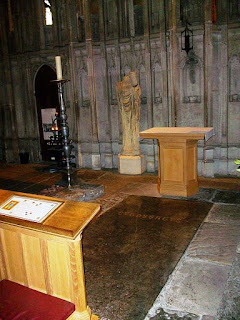 As we all know, the mortal remains of St.Cuthbert lie in Durham Cathedral, right? Well, probably. The picture above tells us the official story, but a legend has persisted for centuries that the great saint’s bones actually rest elsewhere – and that the secret location has been passed down to a select handful of clerics still living today.

The history of St.Cuthbert’s remains and all the various relics that went with him is a lengthy one. To cut this very long story down to a manageable size, after his death in 687AD he was shipped from pillar to post for several centuries until he was finally laid to permanent rest within the walls of the newly-built cathedral around the turn of the twelfth century.

He has been disturbed at least thrice since. Once in 1541 when the Dissolution targeted the city, then in 1827 and 1899. The sum of the various investigations carried out at these times seemed to confirm the traditional story of the various shenanigans surrounding his post-mortem adventures – yet a curious rumour persists. Was, in fact, the body switched at some point, and the real remains hidden elsewhere?

The story goes that when Henry VIII and his chief minister Thomas Cromwell turned their eyes to Durham Cathedral in the dying days of the Dissolution, the monks panicked and substituted Cuthbert’s remains for some other nobody – probably a quick body switch during an overnight stay in the desecration process. As it happens, the ‘sacred remains’ – whether genuine or not – were reburied in due course, and remain where you will find them today, duly marked by a dirty big tombstone. Another version has Cuthbert’s genuine remains being desecrated, re-buried, then subsequently switched during 1542-58 for fear the royal commissioners should return for another poke at the same.

If the true remains were ever secreted away – to another spot in the cathedral, or elsewhere – nobody knows. Well, apart from a long, thin line of trusted clerics through which the secret has passed these past 450 years.