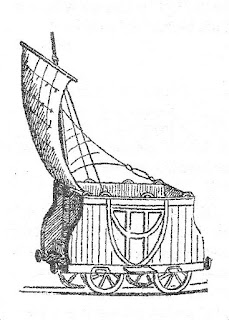 During 1845-6, ex-sailor, Joseph Taylor, struck upon the idea of using sails as a means of propulsion for railway carriages.

ran a provisions shop in near to the town’s first railway station.  In the absence of a Sunday rail service, he used to harness a horse to a railway carriage and haul his family to their place of worship – the Society of Friends Chapel – down the line to (the northern end of the modern-day Thornaby), a distance of four miles.

However, when the climatic conditions allowed, he was seen to dispose of the horse and affix a mast and lug sail to the carriage and glide gracefully into at a brisk eight knots an hour.