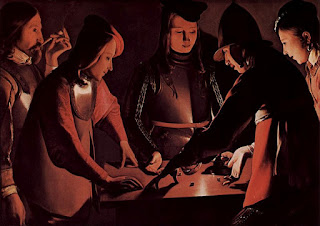 is, arguably, best known for the valuable oil painting called The Dice Players. Usually housed in a special room with dimmed lighting in conditions akin to those of the Mona Lisa, the atmospheric effort of artist Georges de La Tour is one of the North-East’s most prized assets.

La Tour was a 17th century French Baroque painter who specialised in candlelit scenes such as that depicted in The Dice Players. Both he and his family died in an epidemic in 1652 – the painting in question being very probably his last work. He was soon forgotten to history, until after World War II, when a revival of interest began.

His works, though, were difficult to pin down and/or identify. The Dice Players, for example, was left to Stockton Borough by a local resident in 1930, and nothing much was thought of it at the time. The importance of the canvas was not realised until the 1970s, when it was properly identified.

[N.B. The painting has been loaned out to various galleries of late – e.g. the Shipley in – but will presumably be reinstated at on its re-opening in the Summer of 2012]