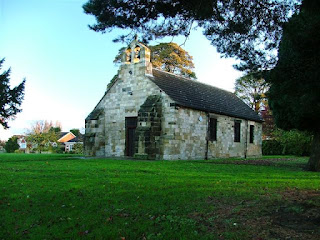 © Copyright Mick Garratt and licensed for reuse under this Creative Commons Licence.

What an odd name for a place of worship: , Thornaby. Well, it’s actually known by its Latin moniker, St.Peter ad Vincula, if the truth be known – but how many locals know the story behind the strange dedication?


The church in question is the settlement’s original place of worship, the site having had a religious edifice of some description since at least the eleventh century. The existing building has its roots in the twelfth century and was originally dedicated to St.Mary Magdalene, but fell from use after the construction of a new church (St.Paul’s) in 1858. However, the old building was renovated in the Edwardian era, after which it became known by its unusual name – though no one seems to quite know why it was chosen.


The term ‘St.Peter-in-Chains’ is derived from the Bible’s ‘Liberation of Saint Peter’ (Acts 12:3-19) which tells of how the Apostle Peter was imprisoned by King Herod, but was freed by an angel the night before his trial. In time, the relic of the Chains of St.Peter were taken to Rome where a church (San Pietro in Vincoli – or St.Peter in Chains) was built around them in the 430s AD. That’s not the whole story, but it’s near enough.


The idea (for the name, that is) kind of caught on thereafter – including among the good folk of Edwardian Thornaby some 1,400 years or so later.