The Scattering of Gisborough Priory (NZ618161) 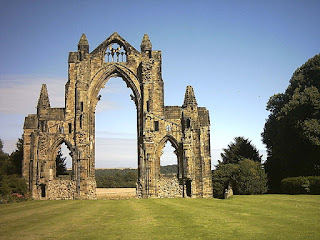 (with thanks to Nez202 at Wikipedia)

After Henry VIII had finished with his Dissolution of the Monasteries in the 1530s, there was a fair bit of unclaimed worked masonry lying around the countryside. Though not all of the nation’s monastic concerns were demolished and recycled, over time a fair few were. Gisborough Priory is fairly typical in this respect.

Formally ‘dissolved’ in April 1540, it was not properly surrendered to the king’s men until December of that year, making it one of the last institutions of its kind to be handed over. There was a plan of sorts to convert the old place into a secular college, but it never came to fruition – and the buildings were almost completely flattened soon afterwards. A certain Thomas Legh was given permission to do so and the pieces “carried away”.

The Chaloners eventually bought the site, moving into what was left of the complex before relocating to their new mansion, Old Gisborough Hall, in the late 17th century. The site underwent further clearance work at this time, and the grounds redeveloped as formal gardens for the Chaloners’ new home.

Victorian historian John Walker Ord lamented the loss of the old priory and the way in which it was carelessly recycled in and around the nearby town:

I have seen with my own eyes broken pillars and pedestals of this august pile desecrated to the vile uses of gateposts, stands for rainwater casks, and stepping-stones over a common sewer. A richly ornamented doorway of the venerable priory forms the entrance to a privy. I have beheld with sorrow, shame, and indignation, the richly ornamented columns and carved architraves of God's temple supporting the thatch of a pig-house.

Other fragments found their way into a folly at Hardwick Hall estate, near Sedgefield – quite a distance – and goodness knows where else if the truth be known…