Well, not so much ‘mysteries’, more ‘oddities’, really. Take, for example, the fact that the village’s most famous historical relic is its set of watery features known as the ‘Moorsholm Docks’ – despite the sleepy settlement’s decidedly landlocked situate.

OK, then, so they’re not real ‘docks’, but more accurately a set of half a dozen sunken water troughs which lie against a boundary wall at the northern end of the village. A curious sight in themselves, regardless of their ambitious name. One can only assume that some joker first coined the phrase many years ago and it stuck. Picture a dozen or so cows or horses nestling up against the man-made waterway and you can just about see how the analogy was made. 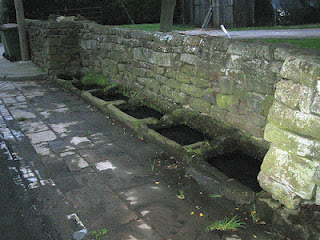 Then there are the strange-sounding pubs that exist, or have existed, in the village. What was formally The Plough is now the Toad Hall Arms – and no one seems to be able to explain the odd new title. Then there’s the (fairly) nearby Jolly Sailor … in the middle of the moors? And, furthermore, there used to be another pub called The Station hereabouts – despite the planned railway line never actually being built!

And, yes, that planned and abandoned railway link still, sort of, survives. The remains (for what they are) usually being referred to as ‘Paddy Waddell’s Railway’, after the guy behind the failed plan.

As if that isn’t enough, the nearby Freebrough Hill is the burial place of King Arthur, don’t you know?