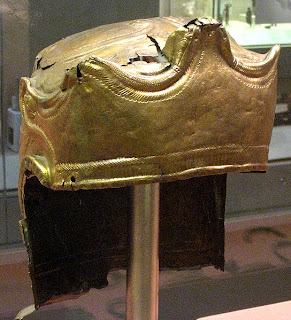 (Thanks to Prioryman at Wikipedia)

The item of Roman cavalry headgear known as The Guisborough Helmet was found at Barnaby Grange Farm, a little to the west of the town after which it was named in August 1864. Like the recently discovered Crosby Garrett Helmet, it was found buried in a flattened state in total isolation from other Roman remains, which has led experts to suggest it was interred as a votive offering by an ex-soldier.

When it was originally found – during excavations for a road underpass beneath a railway line – it could be neither identified for what it was, nor an accurate estimation given as to its age. The copper-alloy piece was at first thought to be a breastplate, and that it was perhaps Celtic or Anglo-Saxon.  It was not properly identified as a third century Roman helmet until as late as 1878 after its donation to the by the landowner Frederick Greenwood. It was then restored, and now sits on display in the museum itself.

No one seems to know whether the head-piece was purely ceremonial, or if it was also used in battle – but it is undoubtedly one of the region’s greatest archaeological treasures.