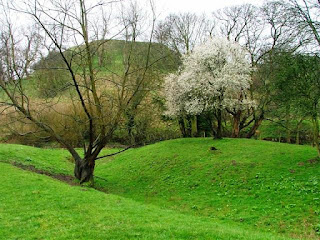 © Copyright Mick Garratt and licensed for reuse under this Creative CommonsLicence

Sometimes you wonder where they come from. Parish names, that is. Castle Le(a)vington is a township rather than a parish, actually, but a visitor may well wonder where the ‘castle’ is, or even was. You’d be unlikely to find it on the ground, though it is still marked as ‘Castle Hill’ on the OS map, tucked into a twist of the River Leven on the modern-day border of . In case you still can’t find it, it’s about three miles SE of Yarm.

Even in the early 1800s it was tricky to find, as detailed by a historian by the name of :


Here is a large steep hill, called the Castle-Hill, from which Castle Levington probably derives its name. It is situated on the banks of the Leven, is of a circular form, characteristic of a Danish fortification, but no vestiges of any building have ever been discovered.

It’s not likely to be Danish, with the history books now attributing its founding to Robert de Brus in the early 12th century. Unlike many such earth and timber constructions, it was never ‘upgraded’ in stone, and faded away rather quickly in the ensuing centuries. It was dismantled in the second half of the 12th century, then the de Meynel’s maintained a timber hall on the spot from the late 13th to the late 14th centuries. And that seems to have been the end of human activity.

Though only the protective earthworks remain today, it is clear that a considerable amount of effort went into the site during the ‘castle’s’ short lifetime.