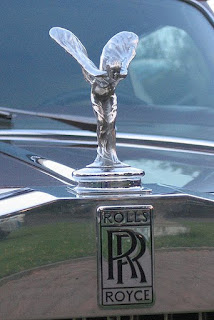 The ‘Spirit of Ecstasy’, aka ‘Emily’, ‘Silver Lady’ or ‘Flying Lady’, is the official name of the hood ornament of the Rolls-Royce motor car. And it was designed by sculptor Charles Robinson Sykes, a native of Brotton.

Sykes (1875-1950) was a friend of the very famous Lord Montagu of Beaulieu, the great pioneer of the early automobile movement. When, in 1909, Lord Montagu was looking for a nice finishing personal touch to his Rolls-Royce Silver Ghost, he asked our man to come up with a design. Sykes produced ‘The Whisper’: a figurine of a woman in fluttering robes with her fingers pressed against her lips – a reference to (and modelled on) Montagu’s secret lover at the time, Eleanor Velasco Thornton, whom his Lordship was precluded from marrying on account of her lowly social standing (an affair which continued long after his ‘society wedding’ to Lady Cecil Victoria Constance).

When Rolls Royce finally officially latched on to the idea of mascots a year or so later, they turned to the same man for a new design for their cars which conveyed “the spirit of the Rolls-Royce, namely, speed with silence, absence of vibration, the mysterious harnessing of great energy and a beautiful living organism of superb grace...”.  The result was the appearance, in 1911, of ‘The Spirit of Ecstasy’ – suitably adorned with Sykes’ signature on the plinth. He was again commissioned by the firm in the 1930s, in fact, to design a lower version of the ‘The Spirit’ for their sports models.