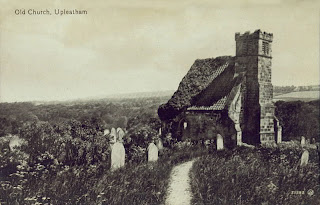 The in the old North Riding of Yorkshire did an odd thing in the 17th century: it moved for no apparent reason.  Well, there must have been a reason, I suppose, but no one seems to remember what it was.  And by moving a few yards up the hill to its current location, it left behind its old place of worship, which still sits, marooned almost in the middle of nowhere, a little to the south-east of the present-day clutch of houses.  Despite this shift in the nucleus of the village, the old ’s continued to serve it purpose for another 150 years.

The village’s new church, built in the 1830s, eventually came to serve the locals, leaving the old edifice literally out on a limb. As early as 1822 the decision had been made to dismantle the original church, but until the new one was finished it limped on – though they demolished as much as they could, leaving the tower and a small section of nave for essential services. When the services stopped, it was left standing for use as a cemetery chapel.

And I guess they just never got round to finishing the job – of demolition, that is. Which is nice, really, as there is evidence of a church having been on the site since at least the 9th century. But can half a church count as ‘the smallest church in ’? I don’t see why not.

As it happens, the ‘new’ village was soon to suffer destruction, too, during 1890-1905 when subsidence caused by ironstone mining necessitated the demolition of more than half the buildings. What an odd history Upleatham has.

Image taken from the ‘Photos of Churches’ website. And more ramblings – and some detailed measurements of the competing ‘smallest churches’ – can be found here.


For a great selection of history books try...