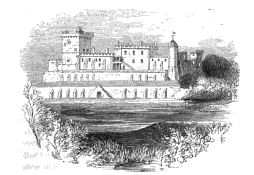 was the common name for old , the edifice which predated the current structure of this name a little to the north-west of the town of .  The above etching seems to be the only surviving image of this mysterious place – itself a rather fanciful (and possibly inaccurate) attempt at recording its image for posterity. It probably acquired its nickname due to its ramshackle look as it fell into disrepair in its final years.

The land thereabouts was granted to the de Brus (Bruce) family in the years after the Norman Conquest, and a castle was soon built. Added to and altered many times over the years, and passing between various families, it seems to have spent much of 14th-18th centuries slowly disintegrating, until it was unceremoniously flattened in 1788.

— Of this old baronial fortress of De Brus and Fauconberg we know little even by tradition. No traces now remain of the frowning keeps and dungeons, the embattled towers, the huge portcullis, the aspiring pinnacles, the graceful terraces, nor even of that “fair sumptuous chapel, one of the jewels of the kingdom,” to which the Lord de Piercy led every Christmas-day the fair Lady de Brus. It has stood on a considerable eminence, surmounted by beautiful woods both above and below, and defended by impassable moats and impregnable outworks and embankments, abundant traces of which are extant to this day. The views to the west and north are diverse and commanding, and embrace, among other objects, the lovely retreats of Upleatham, with a brief glimpse of the ’ mouth and the sea. The drawing of the old castle is supplied by a clergyman of the West Riding, who writes:— “The enclosed sketch represents the castle at that period, and, it is supposed, for three centuries previous. The old castle, built about 1140, was a beautiful specimen of antiquity and of picturesque loveliness, being nearly surrounded by a deep glen, finely wooded. In 1788 the grandson of John Hall, who assumed the name of Wharton, commenced the work of destruction, and, at an enormous expense, contrived to flood the glen, demolish the terraces, pull down every remnant of Norman antiquity, including a magnificent tower; and has left behind him the most extraordinary specimen of folly and bad taste to be found in the whole country.”

Extract from the same letter:— “I have no doubt but that the round tower in the sketch, which had been converted into a pigeon-cote, and the large square tower introduced in the sketch, were there before the Conquest*; and I well remember viewing their destruction with tears in my eyes. The person he employed, and who urged him on to the work of destruction, was a Mr. Mickle, whom I afterwards met at Farnley Hall, and let him feel the lash of my tongue for the mischief he had done in my native vale.”