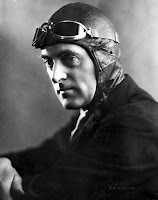 On , the great speedster, Malcolm Campbell, made his very first attempt on the land speed record here in the North-East of . On the day in question he spent his time running up and down Saltburn and Marske Sands, at speeds at which no man on the planet had previously attained.

At the time, Campbell, despite his need for speed, didn’t actually own a car fit enough to get anywhere near the record, so he hit upon the idea of borrowing the vehicle which currently held the fastest mark and took it for a spin on the beach near Saltburn during the Yorkshire Automobile Club’s meeting on the day in question. The five-mile stretch of unbroken flat sand proved to be ideal, and after a number of runs our man posted 138.08mph – a good 4mph better than the existing record.

The powers-that-be refused to ratify the times, however, due to the fact that handheld stopwatches had been used instead of the officially-recognised electronic clocks. eventually bought the car in question – a Sunbeam – renamed it Blue Bird, and had another pop at the record in the following year. He beat it again, but once more failed to have it officially recognised.

eventually broke the land speed record officially for the first time in 1924 at Pendine Sands near .