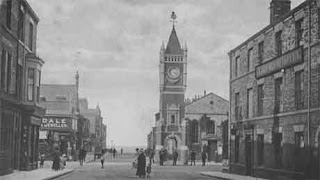 Question: When does a Coronation Clock become a Memorial Clock?  Answer: When it’s in !  Let me explain…

During the future Edward ’s long wait for the British throne, he became something of a regular at the bracing North-East seaside resorts that are and Coatham.  So much so, in fact, that when he was due to finally succeed his mother as monarch in 1901, the local dignitaries thought it a splendid idea to raise a special Clock Tower in his honour – so they set about collecting donations.

and Coatham had recently amalgamated into a single authority, so it was thought appropriate to site the new structure on the old boundary between the two.  Anyway, he can’t have been that popular, as the appeal fell largely on deaf ears.  £300 was raised – some of it by selling ‘penny bricks’ – but it wasn’t considered enough to complete the project, so the venture was shelved.

Come 1910 and the death of the said monarch, they had another whip-round and this time the locals dug a little deeper.  The erection was finally built and dedicated as a, erm, Memorial Clock Tower.  Architect: William Duncan.  Builder: John Dobson.  Clock by Robert Richardson.  Unveiled .