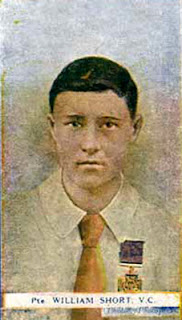 William Henry Short was born in Eston, , on , to his (at the time unmarried) parents, James Short and Annie Stephenson.  He spent his early days at with his eight siblings.  In 1900, the family moved to nearby , Grangetown, and Will became a fairly well-known local footballer, with spells at Grangetown Albion, Saltburn and Lazenby United.

From the age of 16 until the start of the First World War he worked as a craneman at Bolckow, Vaughan & Co. Steelworks in Eston.  At the outbreak of hostilities, he joined the Green Howards and travelled to in August 1915.

During the long, drawn-out affair that was the of the (July-Nov 1916), Short saw action at an early stage around Contalmaison on 5th and 10th July.  Then on 6th August, at Munster Alley near Pozieres, he conducted himself with such bravery that he was to be posthumously awarded the Victoria Cross. As the London Gazette officially declared:

For most conspicuous bravery. He was foremost in the attack, bombing the enemy with great gallantry, when he was severely wounded in the foot. He was urged to go back, but refused and continued to throw bombs. Later his leg was shattered by a shell, and he was unable to stand, so he lay in the trench adjusting detonators and straightening the pins of bombs for his comrades. He died before he could be carried out of the trench. For the last eleven months he had always volunteered for dangerous enterprises, and has always set a magnificent example of bravery and devotion to duty.

It seems that he lay in the trench for some time, dying the next day (7th) before he could be moved.  He was buried at Contalmaison Chateaux Cemetery, though his name is recorded on memorials in both Eston and Grangetown.  The VC itself can be seen in the Green Howards Museum in Richmond, Yorkshire.