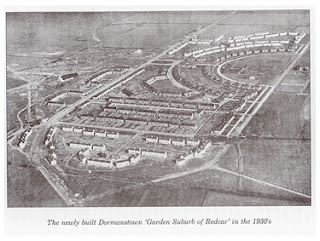 ‘New Towns’ are often thought of as a twentieth century phenomena, but they have been a constant feature of the evolving British landscape – especially since the dawn of the Industrial Revolution.  Teesside is strewn with such Victorian creations, though several did not see light of day until later.

Dormanstown wasn’t even conceived of until the rush of industrial activity brought on by World War I. Dorman Long, the company made famous by its later construction of both the Tyne and Sydney Harbour bridges, was in urgent need of extra workers at the time, and decided to built a new settlement on its own doorstep at the very height of international hostilities.  The work began in 1917, and by 1920 was pretty much finished.  The marshy site went from a single building (Westfield House) to 300+ dwellings, as architects Adshead, Ramsey and Abercrombie literally ‘went to town’ on their fancy ‘garden village’ plans.

Most of the houses were built with steel frames and clad with concrete, but were modestly elegant affairs in the Georgian style – though most (all?) have now been demolished.  The town was added to further in the following decades, including the construction of what is believed to be ’s first purpose-built homes for senior citizens.

The town was, of course, named after Sir Arthur Dorman, the joint-founder of the Dorman Long company.

[The above image is taken from the ‘Historyof Dormanstown’ website – at which MUCH further information is available (click through to the extra pages, too)]