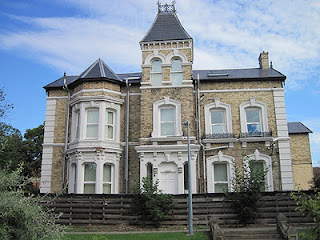 Ernest William Hornung was born at what is now 404 Marton Road, Middlesbrough, on 7th June 1866 – a spot more famously known as Erdely Villa, which was for many years the Convent of the Holy Rood. Hornung is best known as the creator of the Raffles series of novels about the gentleman thief of Victorian London.

Hornung was the youngest of eight children born to wealthy Hungarian coal and timber merchant, John Peter Hornung (‘Erdely’ is the Hungarian name for Transylvania). Assured of a good education, he soon found himself packed off to Uppingham School in Rutland. In 1883, he was despatched to Australia on account of his asthma, where he worked as a tutor for a little over two years – a period of his life which had a major impact on his future writings.

Returning to England in 1886, he worked as a journalist for many years, and married Constance Aimée Monica Doyle, the sister of his friend Sir Arthur Conan Doyle, in 1893. Raffles first appeared in Cassell’s Magazine in 1898, and during the next ten years or so the character featured in 26 short stories and novels – and a play – bringing him considerable fame. Astonishingly, as early as 1905 the character featured in a 15-minute film.

His only child, Arthur Oscar, died in action during the First World War, and he himself visited the trenches – an experience which influenced of his later work. He died in France in 1921, aged 54.

Hornung was a keen amateur cricketer, and was once described as “a man of large and generous nature, a delightful companion and conversationalist”. The model for Raffles was supposedly one George Ives, a Cambridge-educated criminologist and talented cricketer (and gay rights campaigner).

At the risk of infringing copyright, I shall merely point you to a picture of the man himself, which may be glimpsed here. My thanks to Chris Twigg of the excellent 'Hidden Teesside' website for permission to use the image of Hornung's birthplace.