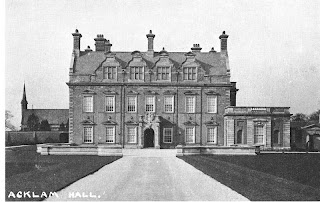 Acklam Hall, famously the only Grade I-listed building in Middlesbrough, dates from around 1680, having been built by Sir William Hustler on land owned by the family since the 1630s.

Acklam has a distinguished history, the Domesday Book recording the existence of a King’s manor there in 1086. The de Boynton family seem to have had early rights of ownership thereabouts – indeed it was they who sold the land upon which the hall would be built to the Hustlers on the eve of the Civil War. Construction is believed to have been completed by 1683 – though a third level was added in 1845. It was – and still is – blessed with highly ornamental interiors.

The Hustlers retained ownership from 1637 until 1928 when it was sold to Middlesbrough Corporation for £11,500.  In 1935 it was reincarnated as , and afterwards lost most of its ornamental gardens as the institution expanded into in the 1950s – becoming in 1968.  Various other name changes followed, until it morphed into in 1995.

With upkeep costs soaring, the hall’s future is in some doubt. As of 2011, Middlesbrough Council/College seem set to sell the structure to developers for multi-purpose usage.