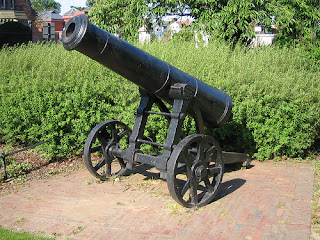 In the aftermath of the Crimean War of 1853-56 various items of plunder found their way to many points across the .  One such piece was a Russian cannon, brought to the young industrial town on board the Advance in 1858.

No one knew quite what to do with it, and it was passed from pillar to post for several years, until Albert Park was laid out in the 1860s – and the cannon placed in a spot overlooking a lake which came to bear its name in around 1866.  It was fired in February of that year to signal the planting of the park’s first trees.  And there it stayed for a very long time.

However, immediately after World War II, the town corporation took the decision to fill in due to ongoing drainage problems, and the gun was placed into cold storage in 1947 – but somehow managed to find itself dumped in a wood in Stewart Park, where it languished for almost two decades.

In the mid-60s, the Evening Gazette publicised its plight, and it was rescued and given to the local Territorial Army unit, who set it on a plinth outside their Drill Hall on the Middlesbrough-Stockton road.  But by the late ‘70s it was back in the hands of the museums’ service – and in 1978 was placed in an appropriate spot near The Dorman Memorial Museum, near to the town’s Cenotaph.

Then, in 2001, the gun was relocated – back to Albert Park, where it remains today.

My thanks to Chris Twigg of the ever-informative 'Hidden Teesside' website for permission to use the above image. You will also find more information and pics here.