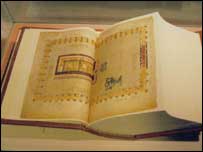 One of the world’s greatest historical treasures, the Codex Amiatinus is the oldest surviving one-volume Latin Bible in the world. One of three Anglo-Saxon Bibles produced by the twin monastery of Wearmouth-Jarrow, it is the only survivor, and dates from the early 8th century. It is likely that the Venerable Bede himself was involved in its compilation.
Now in the Laurentian Library in Florence, it is considered one of the globe’s greatest artistic artefacts. It is a huge tome, with over 2060 vellum pages, made from 515 animal hides and weighing in at an incredible 75lb. Written by several scribes, the original three-Bible project was a mammoth task – most other monasteries were, at the time, reproducing just the four Gospels or the Book of Psalms. The surviving copy was intended as a gift for Pope Gregory II from the then head of the Wearmouth-Jarrow monastery, Bishop Ceolfrith. However, on his way to Rome to deliver the goods, Ceolfrith died in France in AD716 – though his followers completed the task in his honour.
Much of the book’s history thereafter is unknown, though it eventually surfaced at a monastery at Monte Amiata in Italy. Highly prized, it was for many years thought to be a 6th century Italian work; its true origins only being discovered after close scrutiny following its move to Florence after the monastery closed. By this time it had been given the name ‘Amiatinus’ after the religious house where it had spent so much of its time.
The Codex Amiatinus is perhaps the North-East’s greatest ever creation, and something of which we should all be very proud. But was it produced in Wearmouth or Jarrow, or both? Truth is, I don’t think anyone will ever really know for sure. Oh dear, another Tyneside/Wearside dispute.
See here for a much fuller (and very entertaining) history of the manuscript.
Posted by HistoryMick at 10:55