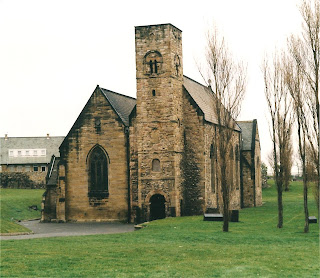 [text from The Monthly Chronicle of North-Country Lore & Legend, November 1891 - author J.R.Boyle FSA]
The tower and the west wall of St.Peter’s Church, Monkwearmouth, are now the only portions remaining of the monastic establishment founded at this place in the year 674 by Benedict Biscop, and immediately endowed with great liberality by King Ecgfrith. Before the sister house at Jarrow was founded, seven years later, Monkwearmouth was the home of Bede, who has left a valuable record of the early history of the twin monasteries in his ‘Lives of the Abbots of Wearmouth and Jarrow.’
The early churches founded in the North were chiefly built of timber, ‘after the manner of the Scots’; but Biscop built his churches of stone, ‘after the manner of the Romans.’ And it is interesting to find that the same great founder of churches also brought makers of glass from France, who not only, as Bede tells us, glazed the windows of Benedict’s churches, but taught their art, which till that time had been unknown in Britain, to the natives.
The sight of a structure which has withstood the storms and changes of more than twelve centuries is always impressive; but especially is this the case when, as at Monkwearmouth, that structure is linked with an event of absorbing interest in the early history of our country. Biscop and Bede were great men. The former was a great builder, a man of large and liberal views, and a generous patron of literature and the arts. The latter was the great scholar of his age. Jarrow and Wearmouth were the principal seats of learning, not in the North alone, not in Britain alone, but in the whole of Western Europe. The perishing sculptures which adorn the sides of the entrance of this ancient tower may seem rude to us, but no one can fail to see in the baluster shafts which are built into the same doorway, and which also occur in the little windows high up in the west wall of the nave, evidence of genuine and refined art. And it must not be forgotten that the famous Codex Amiatinus, the most valuable MS now in existence of the ancient Latin version of the Bible, with its beautiful calligraphy and its gorgeous illuminations, was certainly written either at Jarrow or at Monkwearmouth.
We have only space to add that the lower portion of the tower is of much earlier date than the upper part. This lower part was originally not a tower, but a porch, the ‘porticus ingressus’ as it is called by Bede. The gable line of its original roof may be seen rising to a point between the second and third string courses.
Posted by HistoryMick at 10:50