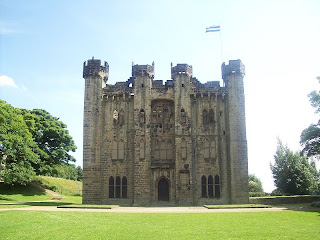 [thanks to Craigy144 at en.wikipedia]
This curiously-situated relic of the past has withstood the ravages of time, the elements and local redevelopment since its original construction around 1400 by one Sir William Hylton, whose family had estates spread across the northern counties. It is not known if there were any previous buildings on the site, though there is some speculation that a wooden structure may have stood thereabouts as early as the late eleventh century when William I granted the land to the family.
Today only the impressive gatehouse tower remains, though other buildings at one time existed to the east, probably arranged around a courtyard. The now ruinous west-facing frontage of the former castle was four stories high (but is now, more-or-less, three), though it still has its four turrets. Carved figures once stood on the battlements, and distinctive heraldic carvings can be made out across the still impressive façade, featuring the arms of the king, the Hyltons and related families. Interestingly, on the eastern face can be seen the ‘stars and stripes’ of the Washington family.

The ruin bears the marks of numerous additions and alterations, including nineteenth century Gothic windows, and scars which give away the former presence of wings added and destroyed over the centuries. Internally, the Great Hall would have been on the first-floor, with private chambers, for the most part, taking up the higher levels. What remains of St.Catherine’s Chapel, founded in the mid-twelfth century, lies nearby.

The Hylton family retained their rank and status until the mid-sixteenth century and the Civil War; but afterwards remained wealthy enough to both retain and develop the castle until the last of their line died in 1746. It passed through several hands in the ensuing two centuries, during which time many of the more obvious alterations evident today were carried out – though much had to be demolished during the twentieth century due to general decay and vandalism. The state took the structure over in 1950, and it is now looked after by English Heritage. The surrounding parkland is neatly maintained by the local community.

The castle was said to be haunted by the Cauld Lad of Hylton until he was appeased with the gift of a cloak and hood.