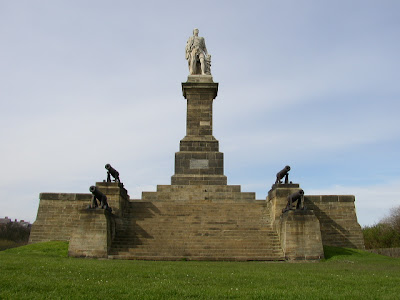 ﻿© Copyright Ken Brown and licensed for reuse under this Creative Commons Licence.
This Monument
was erected in 1845 by public subscription to the memory of
Admiral Lord Collingwood,
who in the “Royal Sovereign” on the 21st October 1805, led the British Fleet into action at Trafalgar and sustained the Sea Fight for upwards of an hour before the other ships were within gun shot, which caused Nelson to exclaim “See how that noble fellow Collingwood takes his ship into action”.
He was born at Newcastle-upon-Tyne 1748 and died in the Service of his country, on board of the “Ville de Paris” on 7th March 1810 and was buried in St.Paul’s Cathedral.
The four guns upon this monument belonged to his ship the “Royal Sovereign”

This magnificent tribute to one of the region’s greatest historical figures stands overlooking the entrance to the River Tyne at Tynemouth. The statue is the work of John Graham Lough and stands atop a formidable pedestal designed by John Dobson. The cannon were added in 1849, four years after its original completion.