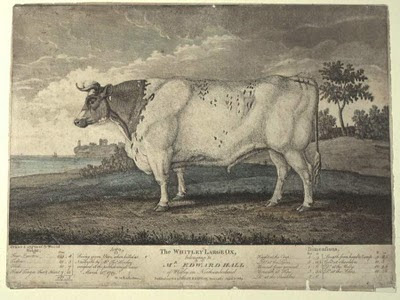 This beauty was so famous in its day that the great engraver Thomas Bewick had an audience with it – if only to immortalise its image prior to the poor beast’s slaughter.
The famous eighteenth century quadruped – known variously as ‘The Fat Ox’, ‘The Whitley Large Ox’ or ‘The Whitley Great Ox’ – was the property of one Edward Hall, and was grazed up to its immense proportions upon fields now occupied by The Fat Ox pub in Whitley Bay. The engraving was produced for the owner, Mr Hall, and published on the 10th April 1789 – presumably to commemorate the animal’s demise.
The occasion of its death produced quite a stir, much as a public hanging might have, in fact. Truly a legend in its own lifetime, it was 5ft 9ins in height and an incredible 216 stone in its prime. It was so big and cumbersome – and presented such an awesome sight – that when it was due for slaughter it took seven days to walk it the ten miles or so to Newcastle through sizeable crowds.
Posted by HistoryMick at 11:52