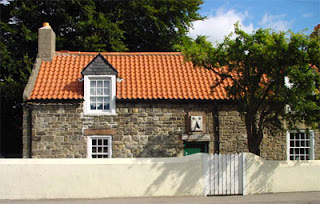 Still standing on the Great Lime Road a little to the south of Killingworth, this splendid little relic of the past was home to George Stephenson and his young family during the early years of the nineteenth century. George was just starting out on his incredible career when he moved into the cottage – as a brakeman in charge of winding machinery at nearby West Moor Colliery – but was internationally famous by the time he relocated to Newcastle twenty years later.
When our man moved in, the cottage consisted of one room and a garret reached by a ladder. During his stay, though, he extended and converted the premises into a four-roomed house. The cottage has a sundial above the door, made by Stephenson himself, and an adjoining plaque which reads:-

George Stephenson. Engineer. Inventor of the Locomotive Engine. Lived in this cottage from 1805 to 1823; his first locomotive (Blücher) was built at the adjacent colliery wagon shops, and on July 25th 1814 was placed on the wagonway which crosses the road at the east end of this cottage.

George’s baby daughter and wife died during 1805-06, leaving George and his infant son as the only surviving family members. Dial Cottage therefore doubles its fame as the childhood home of the great Robert Stephenson…
Posted by HistoryMick at 12:46