The previous blog entry concerned a Northumbrian beauty spot which held a special place in the hearts of the 1st Duke and Duchess of Northumberland. As it happens, the environs of Alnwick are strewn with such eighteenth century ‘picnicking areas’, if the history books are to be believed.

Hulne Park, that splendid, sprawling (and, happily, open to the public) expanse of countryside to the north-west of the town, contains two of these haunts, with a third lying a little to the north of the estate boundary. Brizlee Tower lords it over them all, sitting, as it does, on a hilly prominence at NU158148. I mean, have a look: it’s magnificent… 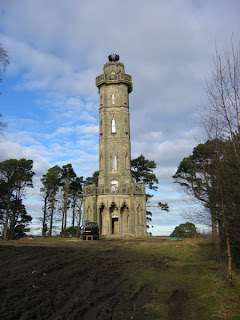 Brizlee Tower
© Copyright Les Hull and licensed for reuse under this Creative Commons Licence
It was designed, like Ratcheugh Observatory, by Robert Adam, in 1777 for the 1st Duke – a year after the death of the Duchess to commemorate her life (he had, after all, inherited his title through her line in 1750, lucky chap). It stands 87 feet in height, and provides spectacular views of the surrounding parkland – itself laid out by ‘Capability’ Brown – but is nothing more than a folly. The tower has recently undergone repair after being placed on the English Heritage ‘at risk’ register. It is a Grade I listed building.

Hulne Priory (NU164158), though not an actual creation of the 1st Duke and Duchess (it was founded in c.1260), was most certainly added to by them both before and after the latter’s 1776 death. For once, the Duchess would at least have been able to enjoy her summer days in and around the old place, much as tourists do today. But to get there you’ll have to walk! 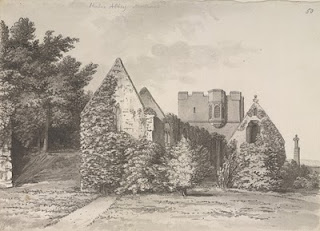 Finally, there is Heiferlaw Tower (NU183177), built in the late 15th century for the monks of Alnwick Abbey – most probably as a lookout and/or beacon to warn of Scottish raids. It is built in the style of a bastle: animals/storage at ground floor, accommodation above. After the Duke & Duchess had finished using the place for their leisure purposes, it came back into use, briefly, as a lookout point during the Napoleonic Wars.

There’s a nice pic of Heiferlaw Tower here , from where you can access plenty more information on all of the abovementioned sites.
Posted by HistoryMick at 12:08