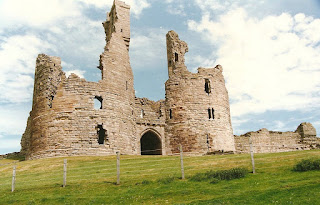 One stormy winter’s night as the skeleton of Dunstanburgh laboured through another of its strenuous battles against the wicked Northumbrian elements, there came to the doors of this desolate fortress the gallant knight, Sir Guy.

Unable to gain entry, the pathetic figure of Sir Guy settled himself as best he could in the porch and prepared for a long cold night. As he sat watching the storm, unable to sleep, there was a huge crack of thunder on the stroke of midnight and the castle doors burst open. In the doorway there stood a huge figure of an old man, bathed in flames, with a flowing robe and a long, white beard. As Sir Guy stood transfixed, the old wizard extended a crooked, beckoning finger and the brave knight crossed the threshold.

After passing through a labyrinth of passages filled with eerie sounds and strange creatures they passed into a huge, dimly-lit subterranean hall. A hundred black steeds and their white knights lined the walls, spell-bound, and opposite Sir Guy there stood two giant skeletons guarding a crystal tomb, within which lay a beautiful young woman in a deep sleep. One skeleton held a sword, the other a horn, and only a courageous knight brave enough to come thus far and to then make the correct choice between the two could break the spell, he was told.

After much thought Sir Guy chose the horn and, as he blew, the hall came to life. The knights awoke and the horses reared excitedly. The girl, too, awoke for a moment then passed sadly back into her deep sleep. Whereas he might have bravely taken the sword, he had selected the horn – a symbol, even if he did not realise it, of a cry for help. He had, of course, made the wrong choice. The resounding sound of an evil cackle of laughter filled the hall and darkness descended, Sir Guy collapsing unconscious.

Waking in the porch the following morning he frantically re-entered the castle and searched its corridors for the enchanted hall and its sleeping beauty, but nowhere were they to be found. It is said he continued his search until his death, and that his ghost continues the search to this day.
[text lifted unashamedly from Aspects of North-East History, Volume 1 … but that’s all right, because I wrote it myself]
Posted by HistoryMick at 12:16